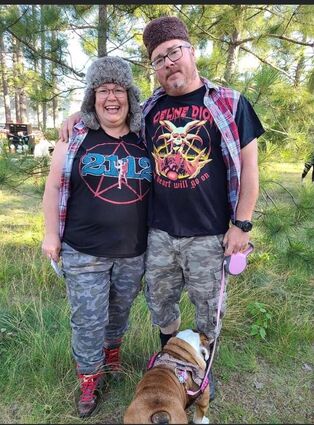 The Femme Fatale Trail Ride has evolved from a group of friends getting together for an ATV ride, to the epic Femme Fatale fundraiser it is today.

"My first ATV was a Sportsman 500," recalls Penny Turgeon-Kimble. "I came up with the idea for a women's ride where we could take a slower ride than the guys do and avoid the big mud puddles." Many who took part in that original ride continue to ride in each Femme Fatale Trail Ride year after year.

"We rode from the Eagles in Warroad out to Four Town," said Dianne. "It was a long, very dusty ride and many of us did not have goggles. Our eyes got so red and bloodshot by the time the ride was over. There was only one lady working at the Four Town restaurant-bar, to make hamburgers and gas us up, even though she knew we were coming. Emily Turner was on the first ride and so was my daughter Kim and my grandchildren Blake and Rylie. I said I'd never go on another ride to Four Town!"

Donna Pederson remembers how they managed to gas up all the ATVs.

"We had someone take notes as each person gassed up, keeping track of how much gas we each got, so that we could pay when we were all done," reports Donna. "My daughter Sherrie and her friends from Roseau were on that first ride."

By 2022 Femme Fatale, held annually the last weekend in July at Clear River Campground, has become a bigger production.

"We start setting up on Wednesday night," said Penny. "We set up my two garage tents, the HELPP tent and various other borrowed tents and tables. Some years we have lunch catered and some years we cook. Every year is different." This year's lunch were delicious perogies prepared by Penny's mom and a poutine bar, cooked and served by the Shriners.

"We had a lot of sponsors that year and a lot of fundraising help from Baudette and Roseau,"

"In 2021 our ride raised $12,000 for the Beltrami Historical Society for a new steeple for the Penturen Church and $4,000 for Easton Erickson. We've raised money for the Sunshine House in Grand Forks and seeded the start of HELPP (Help Ease Local People's Pain). This year's ride was dedicated to raising money to buy Motorola 4000 Portable Radios for Warroad Fire and Ambulance. Portable radios are invaluable in our rural area, and not just in the forest but in farm country as well."

"We are presenting a check for $8,350 to the Warroad Fire Department and $2,657 to Conner Samson, a longtime participant of Femme Fatale, and 13-year-old with MS," reports Jodi Milford.

Femme Fatale Trail Ride is fully committed to fundraising as well as to having a great family day of trail riding.

"Several years ago we opened up our ride to include families," said Jodi Milford. "Each year we come up with a theme and decide who we will fundraise for. This year our theme was "The Great White North" where everyone was supposed to bring their "eh" game. There were six teams, six different routes, with six stops each. This year's teams were called The Canucks, The Jack Pines, The Bog Trotters, The Lumberjacks, The Hosers, and The Puckheads. At each of the six stops, raffle tickets were sold for $1 each for first, a raffle drawing prize, and second, raffle for a key that may possibly open the grand prize of a Craftsman tool box filled with tools at the end of the ride."

There were also several side raffles sponsored by the six teams to raise money and door prizes given out as well.

"Last year we broke our record with 223 riders," said Jodi Milford. This year was our second largest year with 190 riders."

"We could not have such a successful ride without our many sponsors and all those who donate prizes," adds Penny Turgeon-Kimble. For more information check out FEMME FATALE ATV RIDE on Facebook.