By Ryan Bergeron The Tribune Greenbush 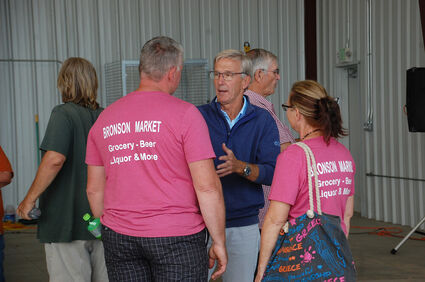 Republican candidate for Minnesota Governor Dr. Scott Jensen ﬂew into the Roseau Municipal Airport for a rally on a sunny August 13 day. Several signs inside this airport rally space read, “Heal Minnesota,” with the faces of Jensen and his Lieutenant Governor running mate—former Minnesota Vikings player Matt Birk— on each side of these signs.

Asked what “Heal Minnesota” means to him, Jensen pointed to the need to restore two things: “hope and conﬁdence in our own ability to think things through.” He said people have had much fear, scared to a degree in which it makes it difficult for them to think for them- selves.

“When they can't think for themselves, they start to question how they think, who they are, what they're contributing. All of those things lead to a certain sense of hopelessness. So Minnesota is a little short on hope. And I think our campaign just really allows the movement, and I think a lot of that movement is born out of a renewed hope that, ‘Hey, we're good enough.’”

Danielle Byfuglien from Wild102 emceed the event. Current Roseau Mayor and former Minnesota State Representative Dan Fabian spoke, ﬁnishing his time on the rally stage with the Pledge of Allegiance. Jackie Poell from Roseau then sang the National Anthem.

A large banner reading “Dr. Scott Jensen for Governor” in white, maroon and gold colors— a tribute to Dr. Jensen’s University of Minnesota alma mater— hung in the back of the airport rally space, providing the backdrop to the rally stage.

The event began at 2:00 p.m. and ended at 3:30 p.m., about the time Jensen was seen ﬂying away. His cam- paign made the trip to Roseau County out of a be- lief that every Minnesotan should be represented by the ensuing Governor. He told his team that he wanted to visit the whole northern border of Minnesota.

“I think that sometimes,” Jensen said, “you know, these cities along the Canadian-Minnesota border, they feel like, ‘Hey, what are we chopped liver?’”

“The governor has not been representing all Minnesotans. Frankly, the northern Minnesota economy deserves the right to ﬂourish and it hasn't,” Jensen said. “It's been pressed down by government. Miners need to mine, farmers need to farm, teachers needed to teach, loggers need to log. And anytime we do something to not allow that to happen, we have to be asking ourselves, ‘What are we doing?’”

Since January 2011, a Democratic Governor has run the state— two terms of Mark Dayton and one so far with current Governor Walz. Tim Pawlenty (2003- 2011) was the state’s last Republican Governor. Asked why now is the time for the Governor’s mansion to turn red, Jensen highlighted how America is in crisis— pointing to COVID, the economy, and energy.

“What we went through in COVID was tough on all of us and granted it was uncharted territory for all the leaders,” Jensen said. “But relatively quickly, we were starting to learn lessons. We could learn that what they did in New York didn't work. So we shouldn't have done it in Minnesota, but Governor Walz did.”

He added how the country’s economy is “nowhere near where it could have been.” He also mentioned how America is no longer an energy-independent nation— a situation he views as growing worse.

Jensen also addressed how politicians aren’t having “frank” and “candid” conversations with journalists, instead giving them small messages and constantly spinning messages.

“People are sick and tired of politicians. They want to have honest conversations. I say things that later on, I think, you know, I don't think I was necessarily right. I keep listening to Minnesotans,” Jensen said. “Yes, I will at times change my views. I do learn. There's things I don't always understand.”

This is why he considers visiting these northern Minnesota areas as important. 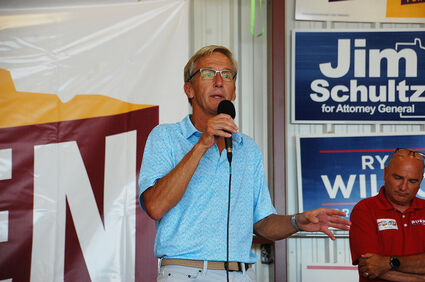 “Every place I go people are teaching,” Jensen said.

Talking about his “Heal Minnesota” campaign slo- gan, Jensen gave his thoughts on the people he is one day hoping to repre- sent.

“We know who we are. Minnesota is a marvel. And the biggest asset we have is not our 10,000 lakes, but our almost 6 million people,” Jensen said. “And we're going to raise those people up, and we're going to once again be that bright shining star of the north.”

The gubernatorial election to choose the state’s next governor— between Walz and Jensen— takes place on Tuesday, November 8, 2022.

At the end of his rally speech, Jensen said, “We are going to take the ﬁght to Tim Walz, and we’re going to win.”