Old, my foot - Kenny Cole is one merry old Soul 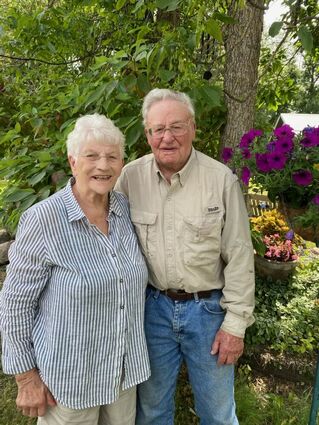 The young at heart lovebirds

At 95, Kenny Cole can walk, talk, and hear - and that's just the frosting on the cake.

On Sunday, August 14, he celebrated his 95th birthday. He probably could run a full marathon if need be.

He's done just about everything else.

The word around his stomping grounds, which is the Warroad area, is that he's a swell guy.

And he's got the prettiest girl.

She was a looker when he spotted her sometime before 1950 after he come home after the service.

His daughter, Michelle Knochenmus, couldn't be more proud of her pa.

"He's doing great and can spar with the best of them," she said a day before his 95th birthday.

Kenith "Kenny" Cole is a 1927 model, a retired cattle farmer and a former DNR Forestry technician.

Above all, he's a family man.

"Mom is 87, and they will be married 70 years in December," said Michelle, the youngest of six - preceded by Gale, Lynn, Wayne, Neil, and Jon - mentioning that her dad joined the Navy towards the end of World War II.

Of course, the pretty girl is the former Patricia "Pat" Vickaryous, who caught his eye.

Even now, he can hustle around the farm, show up at his grandkids' sporting events, and can scout out a good blueberry patch faster than any hungry bear.

Which is exactly why Bob Wennerstrand, his old DNR forestry boss, was singing his praises just prior to Kenny's 95th birthday bash.

Mr. Wennerstrand, who retired at least three decades ago, recalled that Kenny was already working for the forestry when he arrived at the Wannaska DNR Foresty station in 1968.

What he appreciated about Mr. Cole was there was no slacking off during work hours.

He noted that Kenny's father-in-law was Ed Vickaryous, a commercial fisherman on Lake of the Woods.

"Kenith used to help him out on the lake and fought fires, too. He had a common sense approach in doing anything and in solving problems," said Wennerstrand.

In other words, Kenith Cole is a good guy to have in a foxhole when times get tough.

A Pair of Aces

Kenny and Pat are quite a pair.

"Mom and Dad are definitely an example for young people to look up to. They have made a real good life for themselves, worked hard, and taught us some good morals and ethics," said Michelle, sitting at the kitchen table at her folks' place.

"She doesn't know all the bad mistakes and bad things I've done in my life," laughed Kenny.

She has an ace of a guy.

When did you get married, Pat?

Did he sweep you off your feet?

"I suppose you could say that," she said, and laughed.

"This is our farm and where we homesteaded 70 years ago," she said, adding that they first farmed with horses.

She usually calls him Ken.

Kenny was asked if he takes a nap everyday.

"Some days I do, some days I don't. It all depends on what I've been doing," he said, remarking on a wonderful childhood growing up out in the Beltrami Island Forest.

He was born in the forest south of Penturen Church.

"I grew up in Section 36 of Elkwood Township. I went to school there through the fourth grade."

Then, the government forced the pioneers out of the forest. They gave them land elsewhere.

"Yeah, they moved us out. You know what, for years I was lonesome for the sound of the wind through the pines."

"But first I tried to go to the AC (Agricultural College) in Crookston, but I got so darn homesick. I quit, came home, and I didn't go to school for two years."

He needs no prompting like some 75-year-old pup. The words just flow.

"Then I started high school in Warroad and went for two years and I was 17 when I enlisted in the Navy."

It was the summer of 1945 just weeks before VJ-Day.

"They signed the peace treaty while I was in basic training."

Ever get on a ship, Kenny?

"Oh yeah, I was on three different ships," he said, and you'd never know he was an old man with such a young sounding voice and is more active than young whippersnappers in their sixties who see him and think he was born old.

Remember any of the ships?

"I was on the USS Comstock, the USS Kishwaukee, and the USS Butler. I was on another one too, but I don't remember the name."

Mostly, he stood watch, and the USS Comstock was a floating dry dock.

"We did repairs on little, small vessels."

That was in Sasebo, Japan, right on the southern tip.

When he was discharged from the Navy, he came back and finished high school in Warroad.

"I have 18 grandkids, but I've lost track of all the great-grandkids."

He's a lucky guy with a good woman.

They're all gone now, the old foresters who are talked about and smiled about.

"When you were around Roger Hockstedler, there was never a dull moment," he said.

Roger was known as "The Hawk."

"You had to be on your toes because he was always up to some kind of trick. I will say Ralph Thompson was one of a kind, probably one of the best foresters I worked for in my 22 years," he said, adding that Ralph was always looking out for the little guy.

Then, the name of Beans Mattson, another forester, now long deceased, was mentioned.

Kenny wasn't sure how his late pal got the nickname.

"He kind of lived up to the name. He was a lot like Roger Hockstedler. He was full of fun."

His daughter, Michelle, put everything in perspective.

"He does all his own lawnmowing, and they take care of this whole yard by themselves."

"I picked a couple of gallons of blueberries the other day," he said, adding that there were still a lot of green ones.

"We ran into a really nice patch. Don't ask me to tell where it is," he said, as Pat and Michelle laughed.

Pat was asked if there was anything he doesn't like to eat.

For the record, they have 20 great-grandchildren.

How did you meet?

"At a party a few years after he came back from the Navy."

Was he a handsome lad then?

"Oh, yeah! All the gals were after him."

And you won him over!

Kenny's got a good woman, and it was mentioned that's why he has lived so long.

"You bet! That helped a lot. I'd have a tough time if she wasn't looking after me."

They go well together - like pie ala mode and a cold class of lemonade on a hot summer day.

With the ice clicking in their glasses as they toast each other.

Everybody was toasting them on Sunday, August 14, at the home place in rural Warroad.