Two impressive women in their own special ways 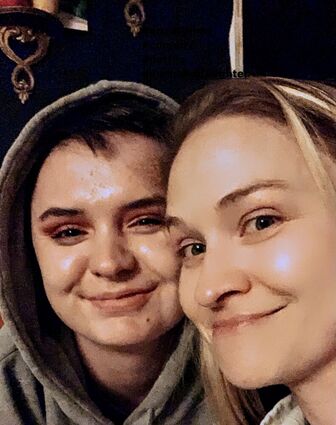 Avery with her mom, Melissa, shortly after Avery's 21st birthday on December 12, 2021

Most days, there's no magic wand, no second chances, and no mulligans.

We prefer a positive turn of events where everyone is cheering, life's the greatest, and there's nothing but happy endings.

That's what we want.

It doesn't always work out that way.

I lost a friend the other day.

I never told her she was my friend.

It's amazing how we become connected to casual acquaintances - the kid at the Burger King counter, the girl at the DQ in Roseau, and even the receptionist at Altru Clinic in town.

I became quite fond of Melissa Wilson, my favorite librarian at the Roseau Public Library.

Maybe it took her a while to warm up to me.

I ask a lot questions.

We got to know each other over time and discovered that we liked the same type of movies and that Jason Statham is one of our favorite actors.

Sometimes when I walked in, she wasn't all smiles.

But we had a certain rapport.

Melissa, 42, corrected me after I guessed her age at 30 something.

Occasionally, her son Tryce was with her. He's about 8.

The last time I saw them together was in the Roseau Public Library during the week of the Roseau County Fair.

We chatted about the best rides at the fair. Melissa was animated and so was Tryce.

I did a little interview right there for a B-section special on the wrap-up of the county fair for the following week's edition.

That might have been the last time I saw her. She had been bubbly, talked about her three children, and how each is special.

On August 6, she fell down the basement stairs, suffering a catastrophic brain injury.

What do you say to her parents and loved ones?

What can you say?

Tryce, only a third grader, has lost his mother.

I didn't know what to say when her parents texted me last Sunday that Melissa had "passed at 3:00 a.m. this morning."

They were hoping for a miracle.

The tough part is finding the right words. This is what I texted to Pearl and Kristy Wilson on Sunday.

I had such high hopes that Melissa would make a miraculous recovery. She was so amazing and amusing to visit with at the library.

She could be serious and then came her beautiful smile. She was so nice and interesting. What a loss.

Nothing can be worse than losing a child as you have. My sincerest condolences."

Her partner, Jim Floyd, will now raise their son Tryce alone while her daughters, Reygan McCanna, a RHS junior, and Avery Cartwright, a college student, will never have a mother to celebrate their special occasions.

There is one thing we can all do.

It's listed as "Benefit for Melissa Wilson."

There will surely be huge medical bills to be paid. She had spent a whole week in ICU at Altru Hospital in Grand Forks.

That's just two cases of Bud Light, and you would be making a huge difference for a grieving family.

Call it money well-spent in memory of Melissa.

The thing is, she's a natural - talented yet not full of herself.

When she was a RHS senior, she opted for the finest opportunity any athlete could wish for.

She played for the Lady Gophers basketball team when she was 17 on a full-ride scholarship.

She went with her heart.

It's not like being called up from the minors and then declaring, "No, I want to finish the season with the Keokuk Grasshoppers."

She had played brilliantly on the 2017 state championship team and the 2018 state runner-up team.

Certainly, there was disappointment for her Roseau teammates, who had high hopes of winning the region title her senior year.

Katie made the right decision.

This past Monday, August 22, the Star Tribune ran an article on Ms. Borowicz with the following headline:

Last November, following that surgery, Katie and I talked. The skull surgery was not mentioned in that November article in the Times-Region.

She had said that she wasn't ready for that much publicity.

She is now, after a very fine piece by reporter Kent Youngblood of the Star Tribune.

In Borowicz's case, the problem was her brain was normal sized, but her skull was too small, creating pressure that caused part of the brain to be pushed into the spinal canal. The pressure constricted the nerves, causing the formation of a cyst on her spine.

For years prior to the surgery, Katie had experienced problems with her legs.

Yet, she played her heart out.

Katie is on the road to recovery with some hiccups.

She is home on break and mentioned that she loves her Gopher teammates.

But she still has headaches.

"It's tough still having symptoms. It's not that it's completely gone away, and it's not like I can have rehab. It's pretty much a waiting game. Other than that, yeah, I'm doing great. I'm living life, love my family and hanging out with them as much as I can."

She has read the Star Tribune article in which Mr. Youngblood explained the surgical procedure "of shaving off part of her skull, cutting through the tissue to relieve the pressure and allow fluid to flow more freely.

Part of the surgery entailed removing half of Katie's top vertebra, and it hasn't been a quick recovery.

Whenever she comes home on break from the U of M, she shoots baskets and lifts weights at the school.

Is your hair all grown back?

"Not quite, it's getting there," she giggled.

Where are you on the depth chart?

"I guess we'll see this year," she laughed.

She was asked what sold her on Coach Lindsay Whalen.

"She really connected with me on being from a smaller town and not getting heavily recruited. Just having someone believing in you is what really stood out. She also has great communication. She asks me all the time what I saw during practices, what I saw during a play. It's really easy to talk to her, and that is super important as a player. Especially as a point guard, I need to communicate."

Katie is glad to be playing again with the Gophers.

She has had a wonderful summer. "Tremendous," coach Whalen said. "She's a coach's dream. She has no fear. She's built that way. And she speaks her mind - which, as a coach, on the court, on the floor - is what you want. Last year it was tough without her."

Katie laughed when asked if she can dribble with both hands.

"Yes, I can dribble with both hands" - more laughter.

Is that a dumb question?

"Well," she said, diplomatically, "almost every basketball player at the college level can dribble with both hands."

She laughed even more when I suggested that she should have my cellphone number listed in her directory so when I call again, she can say, "Oh, no, it's Bro again!"

And not pick up her phone.