Here's A lad With a very unique nickname 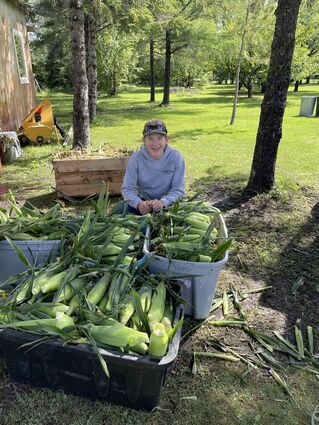 The kid was hard at work, and nobody was around making sure he was. His name, he said, is Justice Ambrose.

He was bagging corn cobs just off Highway 11 east of Roseau city limits at Heppners' Granary.

"They call me Sidekick."

How'd you get it?

"I've been working for him so much and actually his wife decided to call me Sidekick."

He approves of the nickname.

Sidekick works for Diedrich and Tara Heppner, and he starts picking corn around 7 a.m. and works until 10 most mornings.

"I'll usually go work for Erik Dunham on his farm, and then I'll sometimes help at this place."

He can speak in full sentences and was asked how much corn he had picked that Wednesday morning following the big rain that fell overnight.

"I picked around 75 dozen," he said, explaining that he drives along in a Polaris Ranger.

On usual days, he's with Ledger Heppner, also an industrious lad who is Diedrich and Tara's son.

It was wet a week ago Wednesday.

"We were in our Muck boots just sloshing through a half inch of water and just muck everywhere."

Already, Sidekick is looking ahead to the fall picking season.

"Usually when I'm just doing corn, I get in probably about three hours a day. And then, during the fall when I'm doing pumpkins, it's closer to five hours a day."

What do you like better, picking corn or pumpkins?

Bring any pumpkins home to Mama to have her make pumpkin pies?

He is the son of Travis and Jenny Ambrose, and there's another reason he's a hard worker. He's the second oldest of six siblings.

He admitted that his family is partial to eating corn on the cob.

"Not every night but often," said Sidekick, who went right back to work bagging a dozen cobs in each bag.