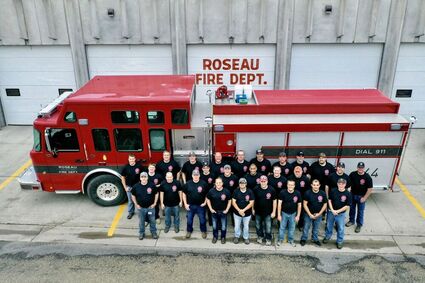 The Roseau volunteer firemen are occasionally a homely lot, but they're our hometown heroes, much like a bunch of Marines following a firefight.

They almost walk like penguins with all their gear, especially after working for several hours putting out a nasty fire in 20-below temps.

They are a dedicated crew, true professionals, and they want to make your day this coming Saturday at the Roseau fire hall parking lot from 5 to 8 p.m.

If you show up at 7:30, you might have to eat elsewhere since everyone wants to support the Roseau Fire Department.

Last year, they ran out of food within a couple of hours.

The smart money is to arrive early, buy more raffle tickets, and get served a great meal to help your local firefighters.

Meet a few of the real pros, along with Fire Chief Leon Huot.

Aaron Rose, a 1996 RHS graduate, has been with the department for 14 years, served as the vice president, and always comes running.

"It takes me 3 to 4 minutes to get to the fire hall, and I'm usually the second truck guy. The first truck is rolling out of the building as I'm pulling up."

Mr. Rose was asked about the new chief, Leon Huot.

Rose isn't a young guy anymore, but there are even older firemen with more than 20 years of service who hop out of bed, throw on their pants, and rush to the fire hall when their buzzers go off.

"They can retire anytime," he said, mentioning veterans like Alex McMillin, Bubba Bernat, Troy Hammer, and several others who have over 20 years as firemen.

"We need to find some young guys," he said, underscoring the great camaraderie, being part of the team, and assisting the community at difficult times.

"It's a great group of guys and that makes it fun."

On the day of banquet, he's on the cooking crew.

"Basically, I'm unloading all the turkeys."

And if any of them catch fire, Rosey knows the proper procedure for dousing a flaming bird on the grill.

The other day, Troy Hammer declared himself "just a fireman!"

"I wear a yellow helmet now."

What color did you wear before?

"A red one! I was an officer for about nine years, and my highest rank was captain," said Mr. Hammer.

For almost twenty-one years, he has come charging out of his house to answer calls in weather that isn't fit for man or beast.

"Maybe I have a couple more years left," he said, adding that he enjoys the job.

Once, the cooking begins this Saturday, Troy helps with the injecting.

"I just hang out and cut the pork and the turkeys when they're done," he said, adding that they get the turkeys from Northern Pride in Thief River Falls.

He lives three-quarters of a mile from the fire hall and was asked his reaction time when his buzzer goes off around 2:30 a.m.

He was already laughing.

"I don't move as fast as I used to. I used to be able to fly up and fly out of the house within a minute or two. Now, I gotta collect my faculties and wonder where I am, and sometimes I put my shirt on backwards."

"It will take me, on average, about five minutes to get there now."

Mark "Bubba" Bernat has served for almost 22 years putting out fires, assisting at accidents, and maybe retrieving a frightened kitten up in a tree.

"It comes in spurts, but lately it's been pretty quiet," he said, and quiet is always good.

"I'm 50 now and it takes me quite a while to get to the hall. I gotta look for my cane," he laughed, adding that all the guys are fast out of the gate rushing to the fire hall.

Always, Bubba comes at life with generosity and a helping hand. It's a family tradition as his dad, Jim, served on the Roseau Volunteer Fire Department for 27 years.

"I joined the year he retired."

And then he mentioned the big shindig on Saturday.

"We're selling raffle tickets, and it's a drive-through again this year."

He's been with the department for nine years. He was elected chief in February.

"We're working on upgrading one of our radio systems in a multi-year deal," he said, noting that it's not as glamorous as a new set of extrication tools.

"But the radios are a huge part of getting our communications right and is one of the areas we need to improve on quite a bit."

The department is upgrading to the 800 or Armor Radio System from the VHF (Very High Frequency), which is being fazed out.

"With our VHF stuff, we can't even communicate to the trucks when they get to Wannaska," he said, explaining that the Armor radios bounce off cellphone towers and work almost everywhere.

Mr. Hout, a Polaris engineer, next commented on the drive-through meal, which has been very successful the past two years.

"One thing we do miss is the community interaction inside the fire hall. We've heard that from the community, too."

For next year, they're planning a hybrid meal where some drive through and others eat in the fire hall.

"What we would like to have is an open house 'Meet the Firemen' type day where families can come out and check out the trucks, kids can spray water, and we can get more one-on-one with the community."

He noted that the "Meet the Firemen" could be held in the spring or the fall.

"With the drive-through, we don't get a chance to really talk to the community very much."

He and his family moved to Roseau almost ten years, and he was asked about his reasons for joining the fire department.

"Ever since I was a kid, I always wanted to be a fireman. I love Roseau and we've put roots down here, and my dad was also a volunteer fireman," he said, adding that his dad's stories got him interested into serving the community.

"I think everybody needs to volunteer and give back, one way or another. This is the way I choose to do it."

He works at Polaris as a test engineer working on engine development.

"I'm working on engines for snowmobile and ATVs."

He was asked how officers are chosen.

"We vote for new officers annually. It could be over next year," he said about his position as chief.

"If the guys deem I'm not doing a good enough job, then they can boot me. I think that's a good thing that we preserve the ability to change the leadership if the guys don't have faith in it. Annually, we vote for officers."

He lives just a few blocks south of the school.

"I can probably be at the hall in two minutes or so. We have to keep it at the speed limit or slower. We don't want to be speeding."

All the meals are $10 per person, and children five and under are free.