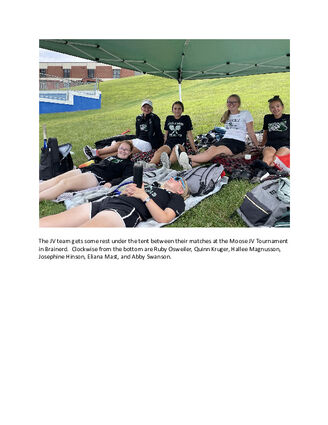 The JV team gets some rest under the tent between their matches at the Moose JV Tournament in Brainerd. Clockwise from the bottom are Ruby Osweiler, Quinn Kruger, Hallee Magnusson, Josephine Hinson, Eliana Mast, and Abby Swanson.

Roseau's JV tennis team has been working hard and playing well over the first half of the season. The girls have played a number of dual matches against a number of quality teams in both Section 8A and 8AA.

The JV Rams started the season in August with a triangular with East Grand Forks and Crookston. After getting swept by a very talented Crookston team, the girls were able to get on the winning side in some matches against the Green Wave. The doubles teams of Abby Swanson/Ava Holmgren and Ruby Osweiler/Bailey Strunk played very well in winning their matches.

During a big day of tennis...