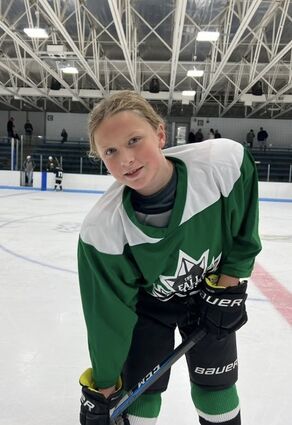 Kynslee Rose earned Player of the Game honors in the opening game of the Fall Classic at the Bloomington Ice Gardens in the Twin Cities last weekend.

The Roseau fifth grader scored the go-ahead goal as her team defeated the Cowboys, 3-1, on Friday afternoon.

After the regular 10-U hockey season had ended this past winter, Kynslee, 10, kept playing and was recently selected for the 20th Fall Classic.

In March and in August, she had competed at two qualifying events and advanced to the final event in Bloomington on September 15-17 and competed in three games.

"Kynslee played for the Jets," said her mother, Stacy Rose, who takes her daughter's success in stride.

A competitor herself, Stacy always sees room for improvement, whether it's stick-handling or skating faster.

"This will be her last year of 10-U," she said, noting that Kynslee is a team player.

Multiple select teams were involved with the majority of the players from the Twin Cities area.

"Like Woodbury and Edina, and she was the farthest one away. She had a lot of teammates asking where Roseau was and how far she had to drive. One of the girls she had played with in March, Addy Cook, was on her team."

The future Lady Rams hockey player has been skating since she was four-years-old, but is not focused solely on hockey.

"She's also in volleyball, tennis, and golf," said Stacy, whose husband, Aaron, a volunteer firefighter, missed the hockey tournament to stay home with their younger daughter, Maddy, who helped at the Firemen's Banquet last Saturday night.

Win or lose, according to Stacy, there are rewards.

"I think it's a good experience for them. She makes a new set of friends and usually communicates with them afterwards."

Plus, her teammates learned that Kynslee had a very long drive to the Bloomington Ice Gardens.