These gals don't take a backseat to anyone 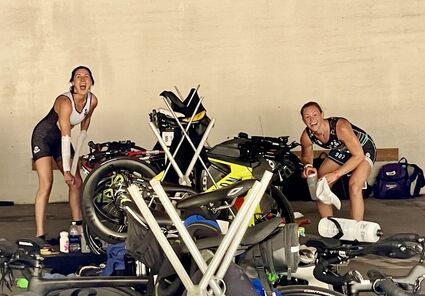 Anna and Amy getting ready for the 56 mile bike ride

For the Twin Cities resident, the tougher the better.

On Saturday, September 10, Amy and Anna Braun, her friend and training partner, were in Madison, Wisconsin, for the Madison Half Ironman 70.3.

That's 70.3 miles of putting yourself through the ringer.

It's the ultimate butt-kicker unless you competed the next day in the full Ironman of 140.6 miles.

The 1.2 mile Madison Half Ironman swim kicked off the event.

"You're in your full-body wetsuit, you start at sunrise, and you swim in Lake Monona."

This was Amy's second half Ironman.

"My goal in the swim was to beat my time by three minutes and I did. It took me 38 minutes."

Luckily, the weather was nice, and she didn't swim in choppy water.

"You come running out of the water, there's carpet on the ground, you lie down and volunteers in yellow shirts strip off your wetsuit."

She grabbed her wetsuit and ran to the transition area to get her bike.

"It was about a half-mile run to get to our bikes."

Welcome to Phase 2 of the Half Ironman, the 56-mile bike ride.

Her last half Ironman had been in 2017 in Benson, Michigan.

The Madison course is known to be really hilly. So, her goal in the bike ride was to be under three hours, and she came in at 2:57.

"Which was awesome, but it was a grueling course. It was like 50 miles of brutal hills."

Coming out of the water at approximately the same time and rushing to get her bike was Anna, 38, a Twin Cities native who once worked for Polaris.

"I've been up to Roseau," said the University of Minnesota graduate, who competed in the 35 to 39 age group and never ran track in high school.

"I just really got into triathlons after college."

How tough was it?

"The swim and the run were very tough. The bike portion was the strongest part for me," said Anna, who scored her personal best on the bike.

She has a Felt Tri-Bike.

The two gals started training together in mid-May, and Anna agreed that it's a case of misery loves company.

"Yes, that's exactly right," she laughed. "We did a lot of the long bike rides and swims together."

She works for a marketing agency that specializes in food and beverages.

"My legs were definitely tired and when I got off my bike, it was such a different feeling. You have to adjust from spinning to running. I had practiced it, but it was different on race day."

Her legs tightened up almost immediately once she started running the 13.1 mile course.

Amy had earlier commented on her favorite bike - a Specialized brand.

A week before the race, she had a big wipe-out on Ruby.

"I wasn't sure I'd be able to race because I hurt my wrist. It wasn't broken, but I sprained it pretty bad."

It was her legs for the tall blonde, who is a dedicated competitor with tremendous staying power.

She had played four years of varsity hockey for St. Cloud State University and is in great shape.

So, the half marathon run is usually her best.

"Before Mile 2, my legs had never felt this tight before. Both of my quads seized up."

Anna's boyfriend, Shawn Weiland, rushed to her aid with salt tablets and began massaging her legs.

"I was kind of stuck for a little bit at Mile 2. It was a miserable 11 miles after that. It was probably the hardest physical thing I've ever done. Yeah, like ever!"

Her previous half Ironman running time was 1:57, but not this time under the circumstances.

Amy's total time for the three events was five hours and 46 minutes.

What did it cost to compete?

"A little over $400 just to do the race, and I received a finisher medal and a cap."

They had their personal trainer.

"Shawn was a lifesaver on the course and kind of our race support system. Amy was super happy he was there," said Anna.

It's an unusual nickname, but Anna is proud of it.

There's more to the story.

"That's my nickname. My dad started calling me Goosebug as a baby, but my nickname is now Goose."

Amy had her own take on the girl called Goose.

"She did really well and crushed the bike and had her best PR. She didn't do as well in her swim this time."

Anna's finishing time was six hours and seven minutes, and she was 31st out of 64 in her age group.

"She felt great, and Anna is one of my best friends. It was the first time we trained together."

It was a super challenging course, according to Amy, whose future plan someday is to run a full Ironman.

"It's such a time commitment though."

She admitted that she felt like a train wreck afterwards.

"I was pretty tired and sore."

Have a beer immediately?

"I tried to have a beer, but I couldn't even drink one. The first things I ate were Doritos and a cold Coke."

And then, the girl called Ames by her dad, saluted Anna's boyfriend.

"Shawn was awesome. He was the one rubbing my legs and when we were on the course, he'd bring us hydration.

Amy has run a full marathon - the Twin Cities Marathon.

Anna has no future plans to run a full Ironman. She just plans to compete in races in interesting locations.

"I did the Escape from Alcatraz Triathlon last year. It was a cool, hard race. They brought us out on boats to Alcatraz, and we swam to San Francisco. Then, we did the bike race and the run."

A year ago, she successfully completed the 41st Escape from Alcatraz Triathlon - a 1.5 mile swim, an 18 mile bike ride, and an 8 mile run through San Francisco.

Anna is undecided, but it might include swimming the Nile, racing camels on her bike, and outrunning a pride of lions.

She laughed when asked if Amy calls her Goose.

Amazing Anna would be more accurate.