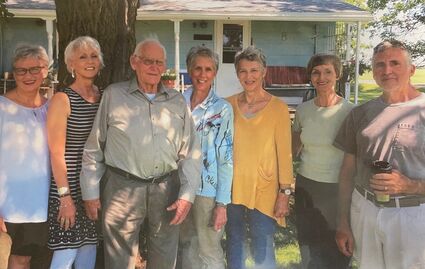 Karl Karlsson, a fine Swede and Salol native and former Stafford farmer, who also was a cattleman and later a Lutheran Brotherhood insurance agent, was spotted in Apartment 211 at the Warroad Care Center on Saturday morning.

Just knock and walk right in.

The TV was plenty loud, which makes sense. His hearing isn't what it once was when he could hear blades of wheat whistling in the wind.

He was two days short of his 105th birthday.

So, he's a rarity in Roseau County and has aged very well.

Still, his hearing is poor, his legs are a little unsteady, and his eyesight is suspect.

Until about four years ago, he wrote lengthy Christmas letters, some even to friends and kin in Sweden.

But then his finger dexterity went south on him much like Whitey Ford, the Hall of Fame Yankees pitcher, whose fastball started to lose its zip in his mid-thirties.

For the first 95 years of his amazing life, he went by Einar. Then, he discovered on his birth certificate that he was born Karl Enar Karlsson on September 26, 1917.

Oh, he always knew his first name was Karl.

Listen up because he speaks softly.

"My father's name was Karl. So, they didn't want to have two Karls in the house."

It helps to know the family history.

His brother, Vern, just turned 100 and lives in Mesa, Arizona. Their sister, Eva Olson, 95, the third and final still alive of the eleven siblings, lives in Roseau.

It was an open-ended conversation and he chose the topics.

Like when he was drafted before the attack on Pearl Harbor on December 7, 1941.

He chose to enlist.

Of course, after the attack on Pearl Harbor, that ended the one-year draft deal and a quick discharge.

He served with the Army Air Corps and even got over to France.

"Only briefly," he said.

Maybe his longevity is avoiding alcohol and not smoking.

He's never had a beer.

"We tried to smoke when we were teens. My father smoked a pipe with Prince Albert tobacco."

These Salol Swedes have ventured out across this country.

"Before the Army, I was working for Consolidated Aircraft in San Diego. We were making 50 cents an hour then."

He took his basic training at Fort Leonard Wood, Missouri. In his living room was a photo of him in uniform in the early 1940s.

It might have been his basic training graduation photo.

He's on oxygen but added that he's feeling great.

"My mother, Brita, never learned English, so we spoke Swedish at home."

"I never complained a bit. I was in four and a half years, and I did whatever they asked of me. I was a sergeant."

Will there be 105 candles on your cake?

"Why waste all those candles?" he quipped.

His late wife, Frances, who died in 2009, was an accomplished artist, and he has two of her paintings on the wall right next to his favorite TV chair.

He smiled when asked who was the toughest of his five daughters.

"Cynthia," he said, adding that she is the oldest.

His only son, Peter, is an attorney and retired at 65. He added that all of his kids have had interesting careers.

"Teresa was the Roseau County Court Administrator and she retired at 65."

His memory is just fine and he really lit up when asked about the old cars back when he was in his late teens and early twenties.

"Seth, and he was ahead of me in several ways, but I don't think he liked school as much as I did. But he did well," he said, adding that Seth was pretty remarkable.

"He had dates with older girls. Even at an early age when he was 14 or 15, he'd talk to a bunch of girls and ask if they wanted to go on a date. He would take them out and say that they shouldn't be concerned if any of them got pregnant because he'd take care of them."

Seth, he said, was quite a guy.

It's been quite a life.

"There were five boys and five girls and I was in the middle," he said, mentioning that there had been eleven kids but a baby sibling died at nine months."

Teresa McDonnell was traveling when reached in Pennsylvania a week ago Thursday.

"Overall, Dad is pretty sharp. He was telling me the other day that he can still remember most of the state capitals.

When did your parents get married?

"January of '46," she said, recalling that she had sat down with her dad about three years ago.

"He would tell me his life stories, and I typed them all out. I put them in a log for my siblings."

She had asked him about his wartime service, learning that he didn't see actual combat.

"He worked on radios and repairing the bodies of the aircraft. His main job was really radio and communication."

Her parents got married in Illinois and then came back up to Salol after the war.

Your dad have any musical talent?

There was an immediate laugh.

"His brother, Vernon, lives in Mesa, Arizona, and that's why we're on this trip. We went out to Mesa for his 100th birthday. His birthday was September 6 and we celebrated his birthday last Saturday."

She learned from Uncle Vern that her dad was pretty good on the violin.

"I'm like 'What?' I never heard that and Dad never told me that. And so, I haven't had a chance to ask him."

It turns out, according to Uncle Vern, that Karl could play Christmas carols and some hymns.

"That was when he was about 19 years old," said Teresa, adding that her dad had spotted the violin lying around the house, picked it up, and figured out how to play it.

Here's another thing about her dad.

"He's very good at math. He only went to the eighth grade. He always had a real ability for math."

Add math whiz to his many talents.

"Vernon spells his last name with just one 's' - Karlson while Dad's is 'ss' - Karlsson."

Then the topic got around to growing up with Dad.

Was he pretty easy going?

"He was strict but he was fair. I think his soft side didn't come out until all of us kids were starting to leave home. I never saw that side until I was in college."

When Einar - as he was known for much of his life - and Frances started having babies, it was pretty rapid fire.

"It was four girls in four years, and then they took a break for four years and my brother came along. I was the fourth girl when they had my brother Pete.

Four years after Pete's birth, the final girl was born.

In birth order, meet the siblings:

Cynthia, Faith, Becky, Teresa, Pete, and baby sister Julie, who probably was the first of the siblings to be diapered in Pampers!

Teresa didn't make it home for her dad's 105th birthday party this past Monday at the Warroad Care Center.

"Most people know him as Einar," she said.

Of course, the majority of them are now deceased.

Reporters Note: In The Tribune-Star, Terre Haute, Indiana, it noted the following on September 23:

Sixteen million of the Greatest Generation served in uniform in World War II. A total of 416,800 were killed in the war from 1941 to '45, according to the National World War II Museum. Fewer than 200,000 who served are still living, according to the U.S. Department of Veterans Affairs projections.

One of them is Karl Enar Karlsson, a fine gentleman and an interesting character himself.