Spunky Lass Is Just Getting Started on the mat 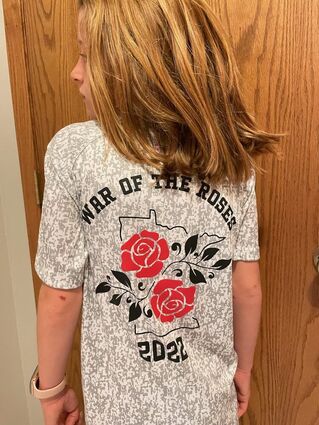 Kendyl with her tournament souvenir t-shirt

Imagine riding almost 15 hours from Roseau to Indianapolis for an all-girls wrestling tournament last weekend, go up a weight class, lose all seven matches, and only then shed a few tears.

This past Tuesday evening, Kendyl Mack, age 10 and a Roseau fifth grader, was asked if she still likes wrestling.

"YES!" she said in the affirmative, adding with emphasis that she had wrestled in Indianapolis, Indiana.

Did you win any matches?

This was a national tournament, and Kendyl did have success closer to home last March.

She won the Greenbush and East Grand Forks tournaments.

Then her mother, Lisa Mack, came to the phone.

"We were in Indianapolis for a USA Girls Nationals, which included team and individual competition."

It was called the War of the Roses.

"We drove with Andy Pulk and his daughter, Sarah. They farm near the Strathcona area."

For the record, Sarah took runner-up honors at 164 pounds.

Sarah is a great role model for Kendyl, according to Lisa.

Sarah has been in a number of national tournaments this year. Recently, she competed in Tulsa and will be in Iowa next weekend.

"She should have been wrestling at 58 pounds, but they needed a 66 pounder. So, she wrestled at a heavier weight. That's probably why she had a little more of a struggle."

On Saturday, Kendyl and her Minnesota Storm teammates wrestled in five duals and placed seventh out of 19 teams.

On Sunday, they held the individual competition.

That's when Kendyl cried after she lost out in the double-elimination individual competition.

"This was quite the eye-opener for her. The caliber of wrestling was impressive," said Lisa, adding that had Kendyl been in her actual weight class, she might have done a little better.

"I would say she only cried when she knew she was done because she didn't want to be done wrestling."

"We left Thursday night after work and drove all the way to Eau Claire, Wisconsin, and stopped there at one in the morning," said Lisa.

"And we drove the rest of the way to Indianapolis and got there in time for the weigh-ins."

Then, on Sunday afternoon, they were back on the road to the Greenbush area.

There will be many road trips in the coming years for Grappling Kendyl Mack, a petite lass who has a great future.