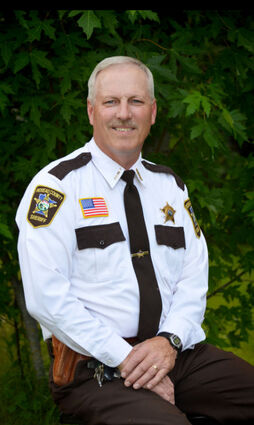 Deputy Gustafson started with the Roseau County Sheriff's Department in 2001.

"I was a dispatcher and jailer and then went with the Warroad PD," he said, mentioning that he later returned and worked as a part-time deputy sheriff.

Mr. Gustafson, 42, is a native of the Karlstad area.

Any reprimands or lawsuits during your career?

"It depends on what you mean. Yes, I've got blemishes, I've been suspended, have letters in my file. You name it, I've done it."

He stated that he hasn't been in trouble for quite a while.

Anything you want to say in your defense?

What will you do differently if elected sheriff?

"The very first thing I would do is change the schedule to have better emergency response time," he said.

"In my opinion, it's not there. Sometimes, there is only one guy working. I work evenings and nights. I am that guy. Let's say I'm over in Warroad helping the Warroad PD or in Roosevelt taking care of a call, and a domestic happens in Greenbush. I gotta tell those people, they're on their own for 30 or 40 minutes before I even get there."

He stated he would have two people on duty at any given time.

"Instead of waiting 40 minutes to get from Roosevelt to Greenbush, it would only be five or ten minutes to get the other guy over there because it's his area of operation."

He noted that there are 10 full-time guys and a couple of part-timers.

He was asked about his relationship with the sheriff.

"I get along with him. I always have. Like I always tell people, I can sit around a bonfire and drink beer with him all night. But when it comes to ideas in law enforcement, we're different."

As a deputy sheriff, he describes himself as "a regular road grunt."

He earned his associate of arts degree in criminal justice from Alexandria Technical College.

"I graduated from there in 2001, and I've been in law enforcement my entire life. Currently, I also work for the Roseau PD as a part-time officer."

"I do what I can when I can. I have a busy schedule and also own and operate a farm and have cattle. So my time to go campaigning is sometimes slim."

What should the public know about you?

"The main thing I want to fix is the response time. I want to fix the morale in the office. I want to fix some of the technology and/or equipment problems we have. I am a very pro-active guy. I'm not going to sit behind a desk and work nine to five."

"If elected and my office is short-handed, I will 100 percent work nights, I will work weekends, I will work holidays, I will sit in the dispatcher's chair, I'll be a jailer, whatever is needed to make the sheriff's office run like it's supposed to. I'll do that. Nothing is above me. I will engage with the guys, get to know them. It's basically one of the morale things," he said, adding that they will be part of the hiring process because it's everybody's department.

"It's not just the sheriff's decision. Everybody should have a decision on or at least an opinion on either upcoming new policies or new hires."

He added that new hires is the final decision of the sheriff, but everybody should have a say or an opinion.

"I know there's been some hiring that probably was not a good idea, but they did anyway because they didn't ask us. There were one or two I was iffy on."

He remarked that a fellow officer had stated that the hiring would be a bad move.

"Nobody asked us. Because we're the ones on the street dealing with the people, we see things, we share things, and we talk to people. To me, that's just as good as an administrator doing a background check because they should be talking to the guys about someone who's going to be hired. We may know information that they don't."

"I am backed by the overwhelming majority of law enforcement officers, past and present. I know the old sheriff, Jules Hanson. He endorses me. I even got a couple of either present or past county attorneys on my side. I just want to ask this question and the public should ask it, too: Why does the deputy have more backing than the current sheriff?"

Steve has been the sheriff of Roseau County for 12 years.

"Before that, I was a deputy and started out in dispatch just like everyone else does and you work your way up," he said, adding that he started in 1994.

He was elected sheriff in 2010 and reelected to two consecutive four-year terms.

"I grew up in Strathcona, went to Greenbush High School and then attended Thief River Falls Technical College in criminal justice."

He farms 14 miles south of Badger.

Any reprimands or lawsuits during your career?

"Yes, I had three verbal reprimands dating back to when Sheriff Terry Bandemer was in office."

Sheriff Gust noted that all three verbal warnings over a period of several years were from Sheriff Bandemer for not immediately completing investigations and submitting the charges to the Roseau County Attorney's Office.

Sheriff Gust noted that all three verbal warnings over a period of several years were from Sheriff Bandemer for not immediately completing investigations and submitting the charges to the Roseau County Attorney's Office.

Gust noted that the first two verbals were from Sheriff Bandemer for not quickly completing investigations before submitting the charges to the County Attorney's Office.

The third verbal was from Roseau County Attorney Lisa Hanson for not allowing her to determine the actual charges.

If reelected, what would you improve in your department?

"Well, community-wide, there's a mental health issue, but it's not in my hands. We also need the tools to do that job. Every year, we need to improve our ability to deal with mental health situations."

He added that in Roseau County there is a continuing drug problem, which he has always been concerned about it.

Anything you'd improve in your department?

"For the most part, everyone is doing a great job. I give them pats on the back for many things. Sometimes, they don't get that. As far as the personnel, I think we're covering the many calls and who gets them. I don't think we're understaffed. The main thing is, we're accountable for everything,"

Sheriff Gust has his own take on law enforcement.

"You can go overboard on law enforcement, too. That causes a negative reaction in some aspects with the public. It can get burdensome. That's not who we are. We want to be available, but we don't want to be burdensome."

How's your relationship with Deputy Gustafson?

"I think it's good. We work together and he's still on the roster. For me being the sheriff, it's accountability and good ethics. Everybody in my department knows that and how we do things in our personal lives, off and on duty, can have ramifications. We have policies in place for that. My main concern is making sure we are respectable and approachable."

He commented that law enforcement isn't just writing tickets and enforcing the law.

"I like what the old sheriff, Curt Hauger, said. 'You have to temper it with common sense.' That's the main thing in this department right now. Yes, we're law enforcement, but there are times you don't have to write a ticket. You work it out."

He noted that deceased Greenbush lawman Hector Reese insisted on being cordial to the public.

"Yes, I try whenever I can. I spend long hours at the office and then at home on the farm. But we've been out there whenever we can."

What should the public know about you?

"My work ethic here as far as the public sees is honesty, approachability and always accountability. In my 12 years as sheriff, I think that proves a lot. I'm not saying I'm perfect, but it means a lot to the public from what I hear from them. I'm here to support the public as a whole and I've got their backs."

He added again that he's not perfect, but he'll keep giving it 100 percent as their sheriff.

"The big part is how they work with and get along with people. We start out all our deputies in dispatch. They work their way up, and we see how they deal with people in jail. Judging from there, it's how they will work on the road."

Gust remarked that it comes down to judging how they treat people.

"That's my goal. They do the job well and they're smart. They also have to be cordial with the public and have a well-mannered demeanor. We're not better than anyone else. That's my biggest thing, and their personality has to fit the personality of Roseau County."

Who are your supporters in the law enforcement community?

"My coworker deputies here, the Border Patrol, the State Patrol, retired State Patrol officers, and people in the court system. There are a lot of them who are supporting me, and I appreciate that."