At Coast, the Big Antler Contest is a Sweet Deal 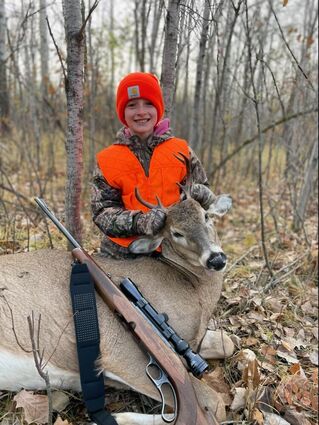 Tim Erickson, the man to see at Coast True Value in Roseau, recently was mentioning a few individuals who were repeat champions of the Big Antler Contest - Randy Holmgren, Dean Mattson, and Jason Monsrud.

He then recalled that the closest a woman came to winning it was back in 2002 when Tommy Gladowski edged Diane Larson by one or two points on the Boone and Crockett scale.

"That's the only official measurement for deer," he said, adding that they don't have an archery contest.

"But Lisa Mack just got done shooting one that went 110 on Boone and Crockett, a really nice nine-pointer. She was also on my board for a buck from last year, too."

They have a ladies contest every year as well as a youth contest.

Have you ever made it on the board?

Ever get faraway competitors?

He recalled the years when the late Bernie Burggraf ran his Big Buck contest from the back of his clothing store.

"He did it by weight, and we've always done it by Boone and Crockett."

Take it from Tim Erickson, the straight-shooting owner.

"For a one-dollar entry fee, it's not much to put in."

A week ago Friday, October 21, Lisa Mack was reached by cellphone at her hunting cabin north of Badger.

The day before she had dropped a nine-pointer with her new compound bow that she had earlier purchased from Rachel Przekwas.

"They always buy good equipment," she said about Andy and Rachel.

"I have a Hoyt Ignite compound bow, and I only pull 48 pounds. I was actually up in our rifle deer stand. I only went up there to look."

She didn't have to look anywhere else.

"All the stars aligned. I hit it right in the front shoulder and it only went about 40 yards and then laid down and died. The arrow actually severed the aorta."

Did you gut it out?

"Cael wanted to learn how to gut it. So, I just assisted him here and there."

Cael had been out bowhunting by himself, and Grandma Shar Peterson was in a different spot.

"We all saw deer and had a fun day," said Lisa, a proud mother.

"Kendyl shot a nice little six-pointer yesterday morning, and she blew the heart right up!"

It was the youth rifle hunt.

Then, little Kendyl recalled her great shot the day before.

"It was a little basket buck," she said in this young girl's voice.

Did you count it off?

"It's her first deer," said her mother.

Did you get nervous?

"Tell what you said after you shot your deer," said Lisa.

"And then she goes, 'I got so nervous, Mom, after I shot, I think I peed my pants. (She didn't.)' She was shaking, she was laughing, she was smiling, she just couldn't believe it," said Lisa, adding that the buck didn't clear the area.

"It probably went 30 yards into the woods. When you blow the heart up, it doesn't go far."

Lisa and Kendyl were in the same small deer stand.

It's quite a story.

When the deer began filing out of the woods, Lisa was saying, "Kendyl get ready! We were clunking around in the little four by four stand. So, it's pretty tight, and I'm trying to film."

All of a sudden, Kendyl, a Roseau fifth grader, picked up her .243 and boom, she shot.

"Did you even aim?" asked Lisa.

Kendyl remarked happily, "I didn't even close my eyes this time."

A week ago Thursday morning up in the Caribou area, Breah Przekwas, a RHS ninth grader, had a wonderful time in the woods.

She had her .243 Ruger and a shot that was impressive.

It was about 200 yards away, and she hit her buck right in the neck.

Is it old hat for you now?

"I get excited," said the 15-year-old, now credited with having shot five bucks.

From 200 yards away, it should be noted that she wasn't up in a deer stand.

She took a knee on the ground and squeezed off a careful shot that an Army sniper would be pleased with.

She is a helluva marksman.

There were three bucks out in the field, but she couldn't get a shot at the biggest one.

The closest buck took off running just as the biggest buck presented a clearer shot.

On Monday, Normie Flagstad, now a certified octogenarian, was spotted in Coast True Value, and he has never won the Big Buck contest.

"I've never entered it," said the former owner and now a regular employee.

It's against the rules for any employee to register.

"You gotta sign up before the start of deer season. You can't shoot the deer and then sign up."

It's a buck to enter. You can't even buy a candy bar at that price anymore. So, it's a sweet deal for area hunters.

"It's always been a buck. Somebody said the other day that maybe we should increase it to two dollars because we could then give a nicer gun away. It's still a buck this year. We're not going to change it."

The contest kicked off in 1983 with Mark Gunderson winning it.

It's a sweet deal for the overall winner.

"We give them a gun of their choice within reason, and second and third place winners get some money," he said, mentioning that they've always used the Boone and Crockett criteria for measuring the antlers.

"It's the rack, rather than the weight. Like I've always said, 'You can't put the weight on the wall, but you can put the rack on the wall.' We'll have at least 500 signed up for the contest before we're done."

Since 1983, only the men have won this contest. However, Mr. Flagstad thinks the time will come when a female or a kid will grab top honors.

"If a kid or lady wins the contest with the biggest rack, they'd win the whole contest."

They'd win the top prize - the $500 rifle - and hold the bragging rights for an entire year.

"It hasn't happened yet, but it could!" he said.

Maybe it'll be this year.