Two good stories to read to your children (and ponder yourself). 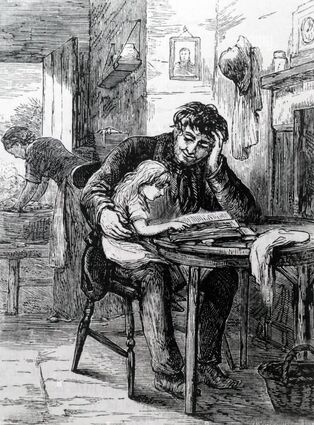 Every evening around 5 p.m. when I come in the door, Bailey my kitty starts meowing up a fit. Non-stop meow, meow, meow, rub against my legs, walking in front of my feet around and around making a noisy ruckus. I say "bad kitty" then I feel guilty because she is so little...so then I say "alright you are a good kitty, just a pesky kitty." She keeps on and on until I go to the refrigerator and take out the can of Meow Mix. She gets one small tsp each day at dinner time which is between 5 and 6 p.m. If I get home late..Oh boy! Do I ever hear about it.

There once was a young boy with a very bad temper. The boy's father wanted to teach him a lesson, so he gave him a bag of nails and told him that every time he lost his temper he must hammer a nail into their wooden fence.

On the first day of this lesson, the little boy had driven 37 nails into the fence. He was really mad!

Over the course of the next few weeks, the little boy began to control his temper, so the number of nails that were hammered into the fence dramatically decreased.

It wasn't long before the little boy discovered it was easier to hold his temper than to drive those nails into the fence.

Then, the day finally came when the little boy didn't lose his temper even once, and he became so proud of himself, he couldn't wait to tell his father.

Pleased, his father suggested that he now pull out one nail for each day that he could hold his temper.

Several weeks went by and the day finally came when the young boy was able to tell his father that all the nails were gone.

Very gently, the father took his son by the hand and led him to the fence.

"You have done very well, my son," he smiled, "but look at the holes in the fence. The fence will never be the same."

The little boy listened carefully as his father continued to speak.

"When you say things in anger, they leave permanent scars just like these. And no matter how many times you say you're sorry, the wounds will still be there".

The verse "be angry and sin not let not the sun go down upon your wrath:" (Ephesians 4:26) applies to the above stories. Repeat patterns will create a habit, habits create a cage that you can't get out of. Most of our self-made prisons are created over a long period of time. A child will adopt a parents behavior because it is his or her "normal." This is how a bad temper can be copied, acted on (in innocence), therefore creating a pattern. The Bible calls this generational sin. Exodus 20:5, states that "the iniquities of the fathers are visited upon the sons and daughters - unto the third and fourth generation." This concept implicates that "unresolved issues get handed down from generation to generation." Some of you who are reading this column want to have the control of Christ in your life and have an anger problem. Just because you commit your life to Christ doesn't mean that you automatically are set free from all your bad habits. Jesus is the bondage breaker. You are a "work in progress." He will provide everything you need to overcome that which slows you down. He provides you with Himself by giving you access to the Holy Spirit. Well, there you have it. Two stories, and what I have found helpful in my own life.