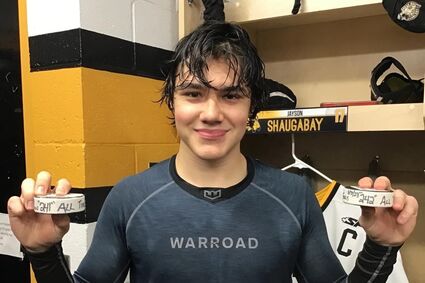 On Saturday January 7, with numerous family and friends in the stands at the Gardens Arena, #17 senior Jayson Shaugabay broke T.J. Oshie's points record of 241 points, held since 2005 at Warroad High School. Jayson first tied, then broke T.J.'s points record twelve minutes into the first period of a game with Fergus Falls, with assists to #18 junior Carson Pilgrim.

Carson also happens to be Jayson's nephew and son of sister, Darnell Tveit, their most vocal fan at Warrior games. Parents of left wing Jayson Shaugabay are Son and Emily Shaugabay, who recall their son skating as soon as he could walk.

"He would walk around in his skates at home and was full out skating on ice at the age of 2 1/2," reports Emily.

"I was just an average player," reports Son. "Jayson has much more talent. He's a unique player and has a high hockey IQ."

"What sets Jayson apart is the way he passes the puck," explains Coach Hardwick. "I tell his teammates they have to be ready when they are on the ice with him, because Jayson might put the puck on their stick even when it doesn't seem possible."

Son is also second cousin to T.J. Oshie's dad Tim, which keeps the points record in the family. Even though T.J. is Jayson's cousin, they didn't meet until Jayson was about eight years old.

"I met T.J. in Winnipeg at a Winnipeg Jets St. Louis Blues game when T.J. played for the Blues," said Jayson. "I've seen him every summer since then when T.J. comes back to Warroad."

Jayson is now looking forward to another chance at the State Championship in March. Warroad Warriors presently are undefeated, 12-0.

"They are hungry to go back to state after placing second in their division last year," said, Coach Jay Hardwick. "I advise the team to focus on each game they are playing, to put our team in a good spot for state tournaments.

"When Jayson broke T.J. Oshie's points record last Saturday, I told Jayson and his teammates; 'you may not think this is any big deal now, but when you are old like me, you will look back and say we witnessed history'. It's a pretty special time."

Jayson Shaugabay has committed to playing for the University of Minnesota Duluth Bulldogs.

When Jayson was asked which NHL team he'd like to play on someday if he got the opportunity, his response came quickly. "I would love to play on any NHL team if I got the chance. It would be great if I could play with T.J. or Brock Nelson."