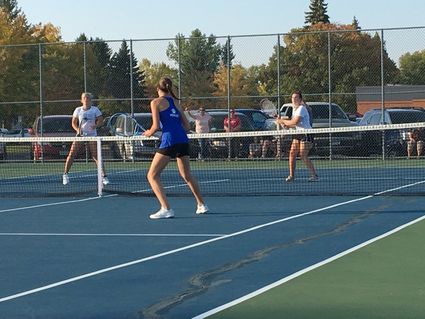 Julia Braaten (left) tracks a lob as Masynn Janicke (right) gets ready to hit an overhead in their 2nd doubles match against Thief River Falls.

After a rocky early portion of the tennis season, the Rams' Varsity started to gain some momentum with the start of the school year and they continued their improved play in rematches against Park Rapids and Thief River Falls in the middle of September.

On Thursday, Sep. 17th, the Varsity Rams were able to reap the rewards of their improved play with their first victory of the season in a 4-3 defeat of Park Rapids. After a disappointing loss this summer in Park Rapids, where Roseau lost four matches in decisive third sets, the girls stepped up their game in the rematch and controlled play...