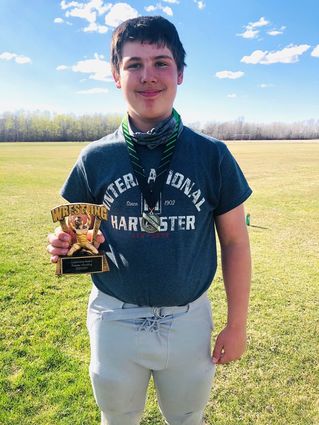 Our area youth wrestlers were recognized recently during the annual Roseau Wrestling Club banquet, held at the city park.  This is an opportunity for our local wrestling club to bring all of our families and wrestlers together and reward everyone involved in making the past season possible.

Unlike any other year before, this year definitely provided the most obstacles and challenges for our club, wrestlers, parents, and coaches alike.  In late December, we weren’t even sure a youth sports season was going to be allowed to happen within the state.  Thankfully, a season was salvaged.  And although it maybe wasn’t the type of season we had originally imagined, there were plenty of positives that came out of it.

During the banquet, coach Hovda spoke about their season and presented two individual awards within his practice group.  Those two awards were the ‘Team Player’ award, and the ‘Hardest Workers’ award.

The Hardest Worker award meanwhile was given to Boaz Dunham.  Hovda said, “Boaz is undaunting!  No matter the opponent, he went after them to win.  Win or lose, he worked hard for any point.  He drilled hard and grinded out every mat minute he had throughout the whole season”.

Although all of these awards were focused around team aspects, rather than individual accolades, each of these kids stood out for their strengths in the respective categories.  Seth Cossentine was chosen for the Bro Olsen award.  Seth's dedication to the sport and Roseau program was second to none as he works year round to improve his contributions to the program.  Similar to the commitment of one time Roseau wrestling coach, Jeff ‘Bro’ Olsen.

Hayden Picard took home the Team Player award for his unselfish dedication to the betterment of his teammates.  There were many kids deserving of this award, but Hayden showed time and again all season that his personal gains came second behind helping his team.

The Hardest Worker award went to Weston Sprabary.  All season and last offseason, Wes continually worked to improve his wrestling skills.  The commitment paid off in a big way for Wes this past winter season.  Great job Wes, keep up the good work!

Our Most Improved Wrestler award was a little more cut and dry this season, in comparison to the other awards.  And although there were other wrestlers who showed a lot of improvement this season, 4th grader Brayden Krank improved immensely.  Brayden practices with some tough teammates who have really pushed him to the next level.  Most importantly, Brayden doesn’t shy away from tough competition.  He has stepped into a role on the youth team as anchor that opposing teams are going to struggle to match up with.

Last, but not least is our Team Leader award.  This team is literally made up of a group of leaders.  However, there’s one 6th grader who all the wrestlers seem to gravitate towards, and that’s Danny Nelson.  Danny has come a long way since his early days within the program.  He has grown leaps and bounds both physically and technically within the sport.  He’s become a great role model for our younger kids and has become a great leader in the example he sets within the practice room.  We wish Danny and our other 6th graders, Tristan Carrizales and Owen Cummings good luck as they move up to the high school program next season.

Great job by all the kids this past season.  The future looks bright with this group of young wrestlers in the program.  Go Rams!!!