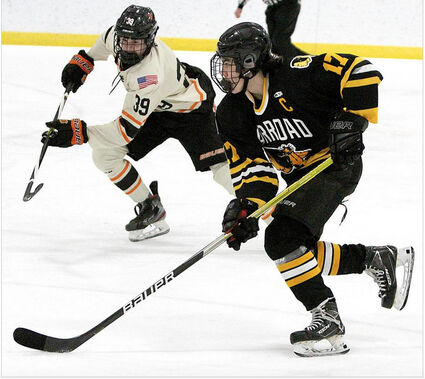 Warroad junior forward Jayson Shaugabay carries the puck while Delano defenseman Craig Halnonen pursues during the first period. Shaugabay scored his 21st goal of the season as the Warriors skated to a 4-1 win.

Warroad coach Jay Hardwick was concerned how his team might start Saturday afternoon.

On the road, in front of a packed house at Delano and in a top-five matchup should be enough cause of concern for Hardwick.

Generally when northern teams make trips to the greater metro, they will stack up games for Friday and Saturday to justify the distance, cost and the opportunity of spending a dozen hours on a bus. But Friday brought something different for the boys from Warroad in a night out to the Xcel Energy Center in St. Paul to take in a Wild game.

The Wild lost, but the experience of watchi...