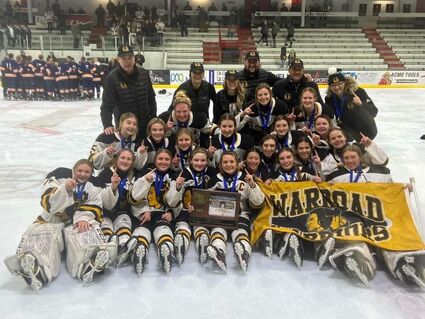 Normalcy has been something that has been creeping back into our everyday lives. And for the 2021-22 season things were looking up for the Warriors.

There was a full season scheduled with some competitive 2A schools. Some Twin Cities trips and a whole group of home games to end the season!

Also, we had our starting goalie returning, four of the team's top five goal scorers returning, and a young defense core getting better by the day. The season was set, captains were picked, and we were ready to go!

As we looked at the schedule to kick off the year, we were set to play 2 of the top 10 teams for both 1A and 2A to start things off.

Holy Family made the trek to Warroad and things did not end as we anticipated. Scoring the game winning goal with seconds on the clock. We dropped the first game of the season and that stung.

The next day was not going to be any easier as we were facing the Mirage, who beat us in the Semi-finals of the State tournament last spring.

And as expected they kept the game tight and we wrapped the weekend with 1-0 win, to start the season 1-1. Fast forward a week and we were on the bus to the Cities facing the other 2 top 10 ranked teams.

After two close fought games we headed north with a tie against Benilde-St. Margaret and a win over the Elk River/Zimmerman Elks.

Although, we were sitting with the 2-1-1 record, things weren't quite where they needed to be. We had only scored 6 goals in 4 games, which is well below the average from previous seasons.

Coming back from our first trip we took some time to try some things and adjust to build some more offense. And the girls' work paid off. Winning the next 5 games with an overall score of 39-4!!

The Warriors continued the offensive onslaught through the remainder of the season; however, the best surprise was the defensive strength our team was showing.

With the strength of the D-core and our senior goalie, Kendra Nordick, the girls did not let any 1A opponent score more than 2 goals against all year! Kendra was able to end the year with a .99 GAA which is incredible!

After the section championship on the 17th, we had just few days to get everything planned and in place for the 2022 State Tournament.

We loaded up Tuesday the 22nd and made the Trek to the X! Your Warriors were right across the street from the X for the week, which turned out to be a blessing as we were able to use the short walk before our first game to get some energy!

Unfortunately, we were a little too eager to get there and ended up being locked out of the Xcel Energy Center for about 20 minutes.

The girls made the most of the time turning on the speaker and pulling out the hacky sack for a quick warm up game!

Well.... that ended abruptly when 8th grader, Jordyn Werk, kicked it a little too hard... The hacky sack was lost on the roof of the X for good...

We made good attempts at getting it back but fell a little short! Finally, the doors were open, and we were headed downstairs for the quarterfinal game against River Lakes!

We jumped out to an early lead and kept things going throughout, finishing the game with a score of 7-0. With goals from seven different players boosting us on to the Semi-finals on Friday!

With a day off between games the team loaded up for a team practice in Eagan followed by a team lunch.

Any guesses on where 21 girls and 4 coaches ate? If you guessed Chipotle, you were wrong... Noodles and Co should be the only right answer!!!

After loading up on pasta we were headed back downtown to get settled in and watch game film for our Semi-final match up against South St. Paul.

We had beat the Packers in the regular season but knew they would come out strong against us, so we did everything we could to prepare mentally and physically.

Friday morning came early for some as our game was at an odd time. A 1:00 p.m. game time meant we needed to be packed and loaded by 11:20 p.m. for the walk over.

This time we were right on schedule, and did not need to find another hacky sack!

Right to the lower level we went, and preparations started for what would be a pivotal game.

The first 17 minutes went by with us getting outsshot 10-8 but the game was still tied at 0-0. Not how we had planned on us starting as we preached coming out hard and getting the first goal.

After Madison Lavergne went off for a minor penalty you could see a little fatigue setting in.

However, out of the box came Frenchie and the Warriors were finally on the board after Talya Hendrickson shot in a rebound! Second period came to a close and we were up 1-0 and starting to play our game.

About five minutes into the third the gates opened. Frenchie scored first followed by her linemate, Lila Lanctot, getting a hat trick in just 1 minute and 38 seconds! Which was also a new state record, beating out previous record holder Natalie Darwitz!

The girls finished the game leading 5-0 and paved the way to the championship game on Saturday against the Mirage.

Today is the day the girls had worked for. Game time was set for 4:00 p.m.

First stop was pregame lunch at Tom Reid's, where we got some chicken sandwiches!

After lunch there was a planned pregame nap, although me, and most of the girls probably didn't get much rest.

Departure time of 2:15 p.m. came quick and the bags were packed for the game. We loaded up the bus with the equipment and headed to the Excel, again with a quick walk to wake up and get some nerves out. The girls started preparing for the game.

Knowing Proctor/Hermantown, we knew their goaltending was good and the defense was good, so we had to be ready to go from the start.

As the clock ran down, the first hurdle hit us... There was an error in the clock which had us about 5 minutes late for warm-ups. Not the way we had hoped to start the State Championship game.

The buzzer for the first period went off and the score was 1-0 for the Mirage. As a coaching staff we did our best to get things back on track. And the girls adjusted. Second period started and so did the offense.

The Warriors scored two goals early in the 2nd to take a 2-1 lead. We ended the period by capitalizing on two powerplay opportunities to take a 4-1 lead to the locker room.

You could feel the momentum and attitude shift during that period. Our girls were dialed in and playing together.

The puck dropped for the 3rd period and before most of the Warroad fans could sit down, Frenchie scored her second of the game, 40 seconds in, to give us a 4-goal lead!

If you were in the arena, you may have heard the deep breath a lot of Warroad fans took. Having been as tight as we have on defense, our girls just needed to play their game to get things done.

Five minutes later, none other than Lila got the 6th goal for the Warriors!

You could feel the excitement from the bench! The clock counted down.

With TV timeouts it felt as though things weren't moving fast enough.

All the Lady Warrior fans in the stands started to count down. Five, four, three, two, one! They did it! The dog pile on Kendra was one for the record books! State Champions!!!

State Champs. It's been a while since we, HockeyTown USA, have gotten to say that! More specifically it's been 11 years since the last championship of any kind in hockey, and that too was for the Lady Warriors!

This year's girls team was determined from the start of the season to get it done.

Lucky for me I got to tag along for the ride on this one a part of an amazing coaching staff. And it was worth every second!

Our first practice of the year you could feel there was something different about the Warriors. Was it skill? Dedication? Training? Motivation? Maybe it was just a pure winning mentality.

Honestly, it seemed as though it was simple and genuine team first attitude. These girls put each other first on and off the ice, and it was incredible to be a part of that culture.

But most of all the support from HockeyTown, USA is also something special. It was truly shown in the return to Warroad! Police and Fire Department escort through town. Trail of cars following, and a huge crowd of people awaited us as Frenchie and Tals led the girls off the bus with our State Championship Trophy!

What a season. What a team. And what a town! #GoWarriors