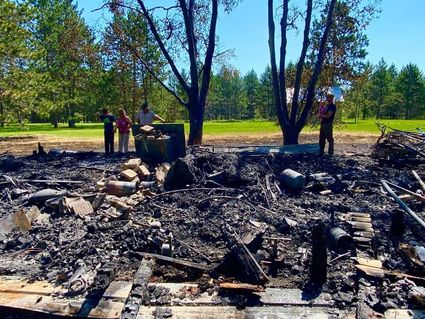 The call came at 4 a.m. Thursday morning, June 25 and for Gerald and Mary Phillipe of Warroad, it was heartbreaking news. Their beloved family cabin, located 14 miles south of Williams near Faunce fire tower, where family and friends had met for horseback and ATV rides, deer hunting, snowmobiling and numerous gatherings for over 20 years, had burned to the ground. Once the location of Wheeler's Bridge Mill, the Phillipe's had purchased their rustic cabin in 1997, along with 160 pine-covered acres. Just as the Phillipe family was absorbing the fact that their cabin was now a pile of ashes, Deputy Fire Marshall State Investigator Andrea Bexell informed the family, the cabin fire was arson.

"We've never locked our cabin," explained Gerald Phillipe. "We've always let friends know they were welcome to use the cabin. We left it open with a few supplies in case someone needed shelter. When the Fire Marshall found proof that sparklers and bottle rockets had been set off inside the cabin and no one came forward to explain why fireworks had been set off in our cabin, the fire was ruled arson. Evidence was gathered, including the cabin's fire extinguisher left in the yard. The Fire Marshall is hoping fingerprints may be found on the extinguisher and those responsible held accountable."

"The Minnesota Arson Reward Project Fund is offering up to a $ 5,000 reward for information leading to the arrest and conviction of the person or persons responsible for the fire," states Investigator Craig Severs of Lake of the Woods Police Department. "Anyone with information can reach me at 218-634-1143."

Because the Phillipe cabin was so remote, it was only lightly insured which will cover only a fraction of building a new cabin.

"We've had a few days to realize all that we lost in the fire," laments Mary Phillipe. "Curtains sewn by Gerald's mother Joy Phillipe and her sister Addie (Toots) Streiff. A shadow box of memorabilia from friend Deb Heaton who passed from cancer. Gerald's father Glen's Elmer Fudd hunting cap. Thank you notes from kids who had fun at the cabin."

"Kolby would always send a thank you note," said Mary. "He loved our deer camp and was always sad when hunting season was over. We were not looking forward to telling Kolby the cabin was gone. Kolby told us how much he will miss the rustic cabin because that is what made deer camp so much fun."

When asked about their favorite memories at the cabin, for a moment the fire is forgotten as great times were recalled with much laughter from Mary and Gerald. Like the time Gerald's brother David had spent quite some time in a deer stand with no luck, only to have Keith Pommerening shoot a huge buck from that same deer stand 15 minutes later. Or the hilarious raisin prank played on Keith's youngest daughter Brooke. Brooke was told there was a deer camp tradition of eating a few deer droppings from the first buck shot. Bending down and twitching the bucks tail, Gerald secretly pulled a few raisins from his pocket, with Gerald's sons, Adam and Aaron, playing along with the prank. Adam pretended to eat a few deer nuggets, while Aaron refused the treat, knowing his dad would, squish them into his mouth. Needless to say a horrified Brooke fast-tracked back to the cabin announcing she would not be eating any deer poop!

"Women of the Wilderness members have gathered every September since 2002 for a week of horse riding and camping," said Mary. "It is such a beautiful quiet place to ride among the pine trees. September is my favorite month because there are much fewer mosquitoes. Many friends came from as far away as Minneapolis, Crookston, Thief River, Bemidji and Larimore, N.D. We always had friends coming and going from our cabin."

"When we first purchased our cabin and 160 acres in the middle of nowhere, our families thought we were a bit crazy," recalled Gerald. "But I wanted a remote area for riding and hunting to pass down to my sons and grandkids. Our property is surrounded by state land so it will remain private. We've had such great times at our cabin. The cabin may be gone but they can't take our memories".