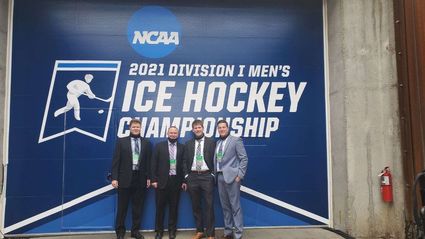 For an amateur hockey official, being chosen to work an NCAA Men's playoff hockey game is like being invited to officiate in the Olympics.

For Nathan Voll, a linesman and a senior captain on the 2007 Roseau High School state championship hockey team, it's all in a day's work.

Or, for Tyler Landman, a sophomore when the Rams won the 2007 state title, he is a natural out on the ice whether in pinstripes or a hockey uniform.

Brady Johnson, who graduated in 2006, is just proud of the crew he's worked with this season.

"I'm honored to be working with the Roseau guys," he said, ment...