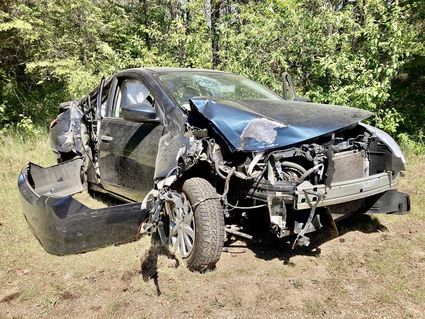 On Thursday, June 3, at approximately 8:30 p.m., a 2015 Nissan lost control as it was approaching the Hayes Lake State Park Contact Station from the beach area.

Speed was a factor.

The driver lost control and hit one of the trees and spun around hitting another tree, according to Kathy Moose, a park employee.

"When we pulled in this morning, we saw the car. A deputy sheriff had talked to Allen Larsen, the park manager, last night."

Two Roseau County deputy sheriffs responded to the accident and determined that the Alabama registered vehicle was traveling at an excessive speed and had lost control.

"We have tried to get everybody to slow down," said Ms. Moose, speaking from the Contact Station.

She had spoken with her boss earlier on Friday morning.

"Allen put up the barricades last night. A deputy sheriff had pushed off all the parts and was cleaning the glass off the road when Al returned to the park."

A week ago Friday afternoon, Roseau County Sheriff Steve Gust explained that deputies Nate Cossentine and Logan Bender had been at the scene of the accident.

Was the driver tested for alcohol?

"No, they thought it was poor driving skills," he said, explaining that the medical authorities would probably conduct a BAC (blood alcohol content) test.

So, it hasn't been determined if drinking was a factor?

"My guys said it didn't appear they were intoxicated or smelled of alcohol. There weren't any bottles laying around and that type of thing. It must have been poor judgment or something."

The Roseau County Sheriff releases information regarding a one vehicle accident that occurred June 3, 2021 at approximately 8:31 p.m.

The accident occurred on County Road #4 on the Hayes Lake Park Entrance Road near the Ranger Station.

The vehicle, a 2015 Nissan, was northbound exiting the park when it left the roadway, striking several trees, causing severe damage to the vehicle.

The driver, 30-year-old Dominique Lavette Moore of Huntsville, Alabama, was airlifted to the Grand Forks hospital for treatment.

The passenger, 27-year-old Jamilah Lashay Mathis-Daily of College Park, Georgia, was transported by ambulance to the LifeCare Medical Center in Roseau for her injuries.

Neither alcohol nor drugs appeared to be a factor in the crash and both occupants appeared to have been wearing their seat belts.

The accident remains under investigation with the Roseau County Sheriff's Office.