Damian is the quiet deputy sheriff in town 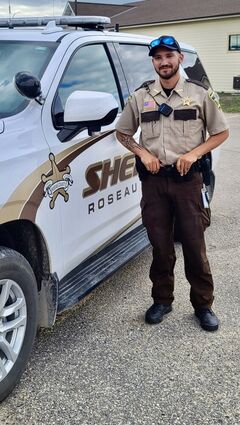 There are all kinds of cops, sheriffs, and peace officers. Some are quick with a quip and even loquacious while others say very little or nothing.

Last week, Roseau County Sheriff Steve Gust talked about one of his new deputies, who fits in well with the department.

This is very appropriate because Deputy Damian Moore won't have a problem finding the Skime Store out in the boonies.

"He's a well-rounded guy and has a straight head on his shoulders," said Gust.

"And he doesn't shoot from the hip," said Gust, noting that Damian worked in the jail shortly after he started college.

"We offered him a part-time job on weekends. It was good for him and good for us," said Gust.

Deputy Moore has passed all his state-required tests and is undergoing on-the-job training.

"He started in the beginning of June," said Eidsmoe.

Damian, a 2011 Badger High School graduate, has worked a variety of manual labor jobs that most cops have little experience with.

He's even bartended for his grandpa, Skip Hietala, who owns Skippy Finns' in Badger.

A week ago, Damian talked about his blue-collar work experiences.

He spent the next two years at Central Boiler before enrolling at Northland Community & Technical College in Thief River Falls to pursue a degree in criminal justice.

"Different after being out of high school for a while," he said, adding that he wasn't the oldest student in the program.

"I was the fourth oldest," he said before explaining his reason for becoming a lawman.

"I just always like to help people," he said, mentioning that none of his relatives has ever been in law enforcement.

This is Damian's first job out of college, and his initial trainer has been Deputy Sheriff Kelly Gustafson.

His present trainer is Deputy Mitch Norberg, who originally hails from the Skime area.

Pull anyone over yet?

"I've done one traffic stop so far. That was a speeding ticket for 10 miles per hour over the limit."

He's happy with his chosen field.

"Honestly, it's been a variety of things. Everything has been interesting. I enjoy all of it."

Ever stop by Skippy Finns' when off duty?

"Yeah, it's a good place. I highly recommend it," he said, tipping his cap to Grandpa Lloyd "Skip" Hietela.

The new deputy was informed that he's not overly talkative.

Damian was asked about the origin of his grandfather's nickname.

He didn't have a clue.

Last Friday, Skip Hietala, a 1949 model and a retired Badger educator, was reached by phone in Badger.

He amusedly explained his nickname.

"When I was born, they named me Lloyd after my father. I was Lloyd when I was in the hospital. When they took me home, believe it or not, they had put me in a little sailor outfit."

His grandmother took one look at the newborn and remarked, "Look at the little skipper!"

And he's been Skip or Skipper ever since.

"Plus, I'm a Finlander from Biwabik," said Skip, adding that he occasionally surprises the local folks when he uses his legal name.

The newest county deputy sheriff is here to protect and serve.

"Another thing about Damian is he grew up in the area. I think that's a big part of our group. People respect that he comes from a good family. That goes a long way in our department. People appreciate that, and I think they get a better outcome. He's doing a good job for us."