Remembering a cool dude who did us right 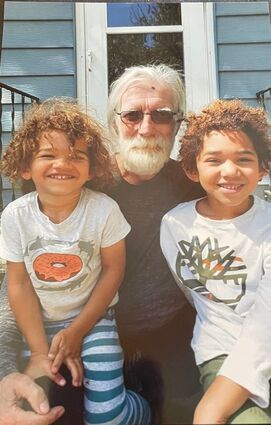 I lost a friend I really hadn't seen in 20 years, and I only lived 25 miles away.

The last time I saw him was during the 2002 Roseau River flood when I drove to Malung and spotted Randy Sandstrom standing in his flooded yard, almost knee deep in water, looking cool and calm.

I was interviewing people affected by the flood.

Randy said a few words, which appeared in the Times-Region, and that's all I remember.

But I took a photo that forever is in one Roseau County book and also the Times-Region archives.

We seldom crossed paths, but his presence has never left me.

He will always be Randy in the present to me.

A friend who spends his winters in Florida was once asked to take some photos of beautiful women in swimsuit apparel.

He replied that he didn't need any photos.

"It's right here in my brain," he laughed.

That's how I remember Randy.

The memories are all there, even if they are generations ago.

It was in late February when Randy's sister, Charlotte, called and asked that I write an article on him.

She said many loving and funny comments about her big brother.

There's a lot I remember about Randy and Liz, his girlfriend and later his wife, coming out to the forest when Lyle Lisell and Karen St. Germain were dating.

We weren't members of the Women's Christian Temperance Union. It was around 1973 or 1974, and we were young and life was good.

I can't remember exactly what year Lyle was diagnosed with colon cancer. He might have been 26.

It was a death sentence although we were hopefully optimistic that he'd beat it. But Lyle knew, and he had two young kids.

That was his heartbreaker, knowing he would never get to see Ryan and Tennille grow up.

There were a couple of times that a joint was produced, and we smoked it together and we all felt good.

It eased Lyle's pain and nausea.

I remember Lyle smiling and saying that it wasn't likely they'd send him to prison.

Back then, the law was bonkers about marijuana.

Probably one of the biggest honors I ever received, especially as an interloper up here, was when Randy and Liz asked me to be Kopen's godfather.

We never read Bible verses together, but we've had a bond.

Just a week ago Friday, he introduced me to a couple of his pals as "My godfather."

I don't know who the godmother was. Maybe it was Karen Lisell.

Lyle attended the baptism, and we would later feel great sadness when Lyle died in about 1981 at age 29.

I could kick myself now for not stopping over to see Randy.

Then again, that's life. In a way, both of us liked staying put.

The day before Randy's memorial party last Saturday, I stopped in at his place.

And there was my godson, Kopen, a good guy to have around if somebody wanted to kick my ass.

We talked outside a while remembering his dad, who picked the perfect name for his son - Kopen for Copenhagen, which is a preferred brand of snus.

"Dad had stomach surgery about three years ago, and they cut out two-thirds of his stomach. It wasn't cancer. He had diverticulitis."

He mentioned that his mom, Liz, and her husband, Jimmy, were camping right on the property but were in Bemidji for Jimmy's reunion.

His pop had never remarried but had a couple of lady friends.

I remarked that Randy was an interesting chap, and I never saw him get upset.

"Nope, not really. He was pretty easygoing. He loved fishing and hunting right up to the end."

His dad, he said, stayed around home the last couple years of his life.

"If people wanted to see him, they had to come over and visit."

I should have known that.

I could have stopped by hundreds of times in the last 20 years on the way to town.

Kopen mentioned that his dad had wrestled in high school, worked at Polaris for many years driving a forklift, and had also worked at the Cenex plant in Roseau.

"He had lots of pals. I don't know how many people will be here tomorrow. It'll be real crazy."

Just the way Randy would have preferred it.

"We grew up in Fox. Mom and Dad had the house there," he said, noting that Randy's deceased parents had raised all the kids at the Malung residence.

"It's our hunting camp now."

We were outside when he mentioned that his sister, Katie, his son, and a couple of friends were inside.

"Katie and I both were in the Navy. I was in three years and she was in for 21 years. She retired two years ago, and she finished as an E-6."

He added that his sister earned her master's degree and will probably start working next year.

"She's got a three-year-old and a seven-year-old. The boys are in California with their dad for another month. We both live in Bemidji."

His dad, he said, had moved here in 2000 when Elder and Phyllis were alive. It's where his dad and his siblings grew up.

He and Lyle had only lived about five miles apart and had gone to Malung Grade School and then Roseau High School.

Randy always was a character.

Then, we went inside to see Kate, as she calls herself now. Kate has two sons - Kanon and Kasan.

And your married name?

Her sons are Milligans. Their dad is Anthony Milligan.

"African-American, Jamaican and Irish," she said, and I mentioned that we need more variety in America.

Kate smiled and shortly retrieved one of the photos taped to the kitchen wall.

"They're cute kids and Americans. The one on the left is Kason and the one on the right is Kanon, who will be 8 in September. Kason will be four next month."

They were posing with Grandpa Randy. In the photo, Randy could pass for Sam Elliot.

Mr. Elliot didn't ring a bell with either Kopen or Kate.

It did with Kopen's son, Kalen.

Kate smiled when asked about growing up with her dad.

"We didn't hang out a lot. He took Kopen on a canoe trip once a year. We went on a family trip once when I was like 12," she said, recalling that her parents had divorced in 1999.

"I went in the service in '98 right after high school. It was the next year they ended up getting divorced. They got married in '73 or '74."

Randy was an unforgettable character to his kids.

"We'd have our Sunday calls when I was in port and not on deployment. I'd call him every Sunday," she said, recalling that she never called too late.

"It got dark and he was in bed. So, if you didn't catch him before he laid down, he wouldn't answer."

When she was in Pearl Harbor, Hawaii, it got tricky keeping track of time.

"He was a riot and definitely one of a kind. I don't know how somebody could be so stubborn and so easy going at the same time," said Kate.

"If he didn't want to do it, nope, he wouldn't do it," said Kate. "God, for stubborn. It just frustrated you."

That, of course, is a Sandstrom trait, according to his kids.

There's a definite stubborn streak in the gene pool.

Taking it all in was Kopen's son, Kalen, a rather shy lad who has a terrific smile.

The K names have continued into the second generation with Kalen, Kanon, and Kason.

A week ago Friday, one day before the memorial out in Malung in which there would be beer and plenty of good grub, the one person who would have been smiling the most, couldn't be there.

Randy was there in spirit.