With the Adaptable, Determined and Capable Ms. Holmstrom 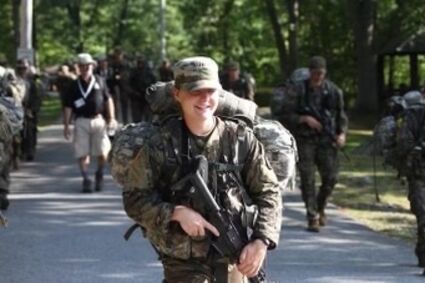 Laura Holmstrom, a versatile athlete-scholar, doesn't look overly tough, but true grit is in her DNA.

The 2022 Roseau High School graduate could easily have attended Princeton or Harvard with her impressive grades and enjoyed an easier college life.

When Laura was accepted to the United States Military Academy, she's never flinched in her determination to be a West Point cadet.

Instead of wondering what to wear at a civilian university, she's had to spit-shine her boots and polish her brass.

Add six and a half weeks of basic training last summer, and she was having no part of being a passenger on the first bus leaving West Point.

The tougher it is, the better it is for this 18-year-old lass.

After all, she attended three schools in her final four years of high school, arriving in Roseau shortly before her senior year.

Nothing's tougher than being the new kid in school as a senior, but it's been a big part of the training for this Army plebe at West Point.

Last summer, she had to endure the "Beast" - six and a half weeks of basic training and PT.

"At the beginning, it was emotionally challenging. You don't have your phone, you're not used to Army life, there are all these rules, and you're getting yelled at to do the right thing."

"I did! By day 3 - and one day was like a whole week long - it was super challenging. But then, once you get past the first week, it just flew by."

There was a lot of PT - short for physical training: push-ups, jumping jacks, squats and running early in the morning.

"It was around 5:30," she said, and was asked about double-timing (running) everywhere.

"Oh, yeah, there was a lot of double-timing and a lot of standing in line. Hurry up and wait."

The Army is known for that.

And know this: Laura was a soccer player in North Dakota and competed all over the U.S. until her family moved to Ely, Minnesota, after her freshman year.

The Beast was to be defeated, according to Ms. Holmstrom.

"Like when you're done, you slayed the beast!" she said.

Go on leave after the Beast?

"No, I stayed there until Thanksgiving. It was very nice but really short. I was home for about three days."

The oldest child of Erik and Becky Holmstrom, she'd never really been away from home other than a week fishing trip in West Virginia.

"You're in a room with some of the girls in your class, and your room might be next to a guys' room. There is an NCO on your floor."

Everything is spelled out.

"If there is a guy in your room, the door has to be open. So, there are a lot of rules to make sure everyone is behaving."

Know anyone who has quit?

"Not in my company of 32 plebes. We have seven girls and the rest are guys."

At five-foot-six, she wasn't asked if she has gained or lost weight.

"I'd never boxed before. You got in the ring with headgear, mouthguard, and boxing gloves. We had 19 lessons, and they just taught you the fundamentals of boxing."

She carried a heavy load her first semester.

How were your grades?

"The grades are still being finalized, but they're pretty good and I'm happy with them."

"I think my major will be chemical engineering, but I'm still undecided. I have until March to finalize it," she said, adding that they are required to get a bachelor of science degree.

She has this confidence that wasn't as evident last spring shortly after being accepted at the Academy.

"We have Monday morning inspections to make sure our shoes are shined, that you got all your stuff right, that you look good and then before classes, there will usually be an inspection. The teacher will go around or assign a cadet to inspect the class to make sure they look good."

"Not yet, It's just been minor stuff like my shoe was untied once."

Think again about sitting down to a leisurely lunch break.

You're on time or you're hungry until the next chow line.

It's a no-brainer that the Army-Navy game is like the Super Bowl. Army could be undefeated, but if it loses to Navy, the season is a total failure.

"I did. It's required. Pretty much everyone goes."

It was a great game, but the losing coach got fired a day later.

"It was the first Army-Navy game to go into overtime. Obviously, Army won 20-17 and then we got to rush the field, which was super cool."

It was a really neat time for Laura. Her dad's parents were at the stadium to visit her and share a photo op.

The girl from Roseau looked delighted as she posed with Rick and Leslie Holmstrom, who came all the way from Superior, Wisconsin.

Just before coming home for Christmas on December 18, the plebes celebrated after the Annual Christmas dinner.

"Afterwards, everyone smokes a cigar," said Laura cheerfully. "It's a tradition."

A member of the National Honor Society in high school, she doesn't waste time at the Academy.

"I study between classes and try to get to bed by 10:30 to get enough sleep. I spend a good portion of the evening - like three hours - studying, doing homework, and getting ready for the next day."

Possibly, a few B students receive letters of acceptance to West Point.

Maybe it's a quarterback with a rifle for an arm or a halfback who runs 100 meters in 10 flat.

Everybody else who gets accepted to West Point is at the top of his/her class.

Laura has a personal code of ethics that she follows.

"I think it's being a good person and looking out for your teammates, your company, your squad, and your friends. You're not going to get through West Point trying to be the best and just helping yourself. People who make it and do well are humble and help the team out."

The Military Academy is her home now.

She is a plebe this year. Next comes the yuk. As a junior, she will be a cow, and the senior year is a firstie.

"As a yuk your second year, you're a team leader and in charge of a plebe," she said.

She knows the routine.

As a plebe, she has to be on the ready for whatever questions come her way, anytime and anywhere at the Academy.

It could be at chow.

She's had to be on her toes when a yuk requires her to state the chain of command, special West Point facts, or even the nonsensical.

"There are little things you have to memorize like 'How's the Cow?' She walks, she talks, she's full of chalk. The lacteal fluid extracted from the bovine of the female species is highly prolific to the n-th degree," plebe Holmstrom remarked sharply.

When were you allowed to have your cellphone?

"Once Beast was done, you got to have your phone. Halfway through the Beast during the Ice Cream Social, they gave you your phone for about two hours. I talked to my parents and Jessie Danielson, a good friend."

"Yeah, we do a lot of it. Like for football games, parades and drill practice during the week."

What have you learned about yourself?

"I was physically prepared, but the mental aspect of not doing everything right was hard. I had to adjust to being wrong sometimes."

There are dates she won't forget.

Like R Day, which was Reporting Day on June 28. That's when they reported for basic training.

Her parents, Erik and Becky, were at West Point for Acceptance Day after they finished basic training in the middle of August.

"That's when they were officially accepted into the corps of cadets," said Erik, impressed with Laura's accomplishments.

"I don't know how to describe her other than she's always been very responsible and a goal setter."

It's quite a gene pool.

"She'll be a diver for the Naval Academy," he said.

It's called the House of Tears - the gas chamber - and they filed in wearing their gas masks.

"You had to say the Soldier's Creed when you took your mask off. It's like 12 lines."

Your lungs explode in coughing spasms just trying to speak briefly in a gas chamber.

A half century ago, a soldier only had to state his name, rank, and serial number before gagging or puking.

She has other fond memories.

Someday, she can tell her kids about the Beast.

"When you finish the Beast, there's the 14-mile march back."

"They were really good. I broke my shoes in before I went."

The rucksack she carried wasn't filled with cotton balls.

It's just the way Laura Holmstrom likes her challenges.

She is the first female Roseau High School graduate to attend the United States Military Academy.