School is out for Assistant Principal Johnson 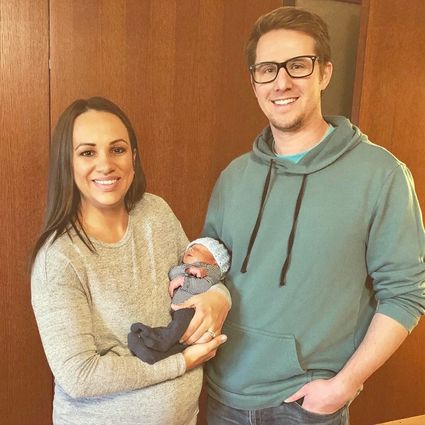 Kelsey and Zach with Henrik

Mrs. Kelsey Johnson, the peppy Roseau High School Assistant Principal who doesn't need to carry a big stick to get students' attention when they are sent to her office on disciplinary referrals or might need an encouraging word during a particularly trying day, was expecting her third child in mid-November.

So much for timetables!

There was no stopping Henrik Oskar Johnson a week ago Thursday, October 17, who came charging into this world like the tiniest featherweight stepping into the ring.

"He wasn't due until November 16," she said by cellphone on Monday morning from her home in Thief River Falls.

She explained their choices for his first and middle names.

"Henrik is a name we have always liked. It was an alternative name for our older son, Odin, 5," she said, adding that their daughter, Augusta, 3, is named after a great aunt.

"We didn't know that there was a family connection," she said, noting that Henrik's middle name, Oskar, was her husband's great-grandfather's first name.

His arrival was a complete surprise.

"I had no idea. I've had kind of a bad cough and I was coughing in the middle of the night and woke up, and I thought my water broke but I wasn't really sure.

She got up to go to the bathroom and then went back to bed.

"I woke up again, and it was pretty obvious that my water had broke," she said.

"I didn't panic because I wasn't having any contractions, and I wasn't in labor. I just kind of waited. I went into the hospital (Sanford Medical Center) around 9:30 in the morning."

Whenever there is a premature birth, there are certain protocols.

"We were a little concerned because, of course, he's very early. My doctor had to speak to his pediatrician because, typically, they send a baby that's under 36 weeks to Grand Forks." she said.

"They looked at the ultrasounds that we've done and said we could stay, which was great. They worry about their lungs and if they're developed all the way and if they have trouble breathing."

Kelsey has this radiant outlook on whatever comes her way.

"We had just about everybody but his brother in the room when he was born," she said. "We had a pediatrician, a respiratory therapist, an anesthesiologist, Dr. Michael Bass, two nurses, and my husband, Zach. It was a packed house."

Oh, it was some birth, no matter if it seemed like standing room only. And if they were worried about the baby's lungs, little Henrik proved to be a complete showoff.

"He came out wailing. He kept crying, so that was good," said Kelsey, who calls Zach, a total super dad.

"I texted him when I was in the hospital and said, 'I hope you're enjoying the long weekend. I think you're on call on Monday," she said giggling.

She has no doubt that Mr. Olson will do an outstanding job while also crediting an amazing office staff that will assist him.

"Our kids are just like over the moon excited," she said. "They think it's pretty cool. They went to daycare and preschool today to tell their friends." she said.

"He's doing so, so good. For being early, he's probably a better baby than the other two were. We came home Saturday afternoon because he did really well in the hospital. They let us go right on time."

"I was going to keep working until I had him. Whenever he came, he came," she said, mentioning that she will be on a 12-week maternity leave.

"Which I think is good. He might be our last baby. You never know. If he is, then it's worth the time spent."

She will miss her day job.

"It is pretty amazing to be in a school district that embraces the importance of family," she said, noting that she has felt very supported throughout her journey of being a young administrator and a mom with a growing family.

"I think the message we are sending to our students is that having a successful career while building a family and maintaining a positive personal life is possible," said Kelsey.

"If you work hard and are kind to people, you can do anything in this life."

Then, it was time for Kelsey to nurse little Henrik, the surprise baby who arrived on his own timetable.