12UA Girls are the District 16 Champions 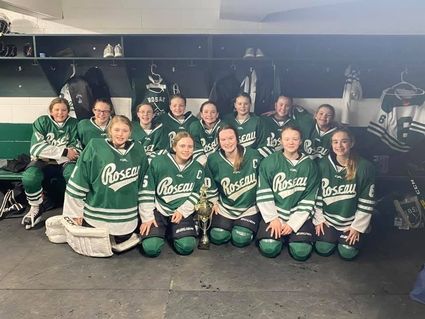 Sunday's Championship game started out with a goal by Jasmine Hovda, assisted by Addy Johnson, putting the Roseau girls up 1-0. Roseau struck again with 1 minute left in the 1st with a Power Play goal by Summer Byfuglien, assisted by Jasmine Hovda, making it a 2-0 game. Half way through the 2nd period, Karina Christianson scored, assisted by Lily Erickson and Jasmine Hovda, 3-0 Roseau. A Warroad goal by Emily Lorenson made it a 3-1 game at the end of the 2nd period. Payton Remick got an unassisted goal halfway through the third period, putting the Roseau Girls up 4-1. Final Score: Roseau 4 - Warroad 1

Next up for the Roseau 12UA: North Regional Tournament in Grand Rapids/Greenway, February 28-March 1st. They will take on the #3 seeded team from MN Hockey District 3.