With the unflappable editor of the Stars and Stripes 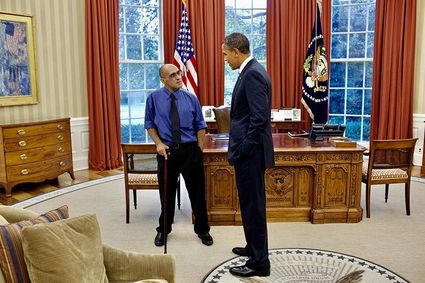 Double amputee photographer João Silva, following his release from Walter Reed Hospital after stepping on a land mine, meeting with President Barack Obama in the Oval Office.

Terry Leonard, the editor of the Stars and Stripes, the American military newspaper, never saw combat in Vietnam.

In fact, he never ended up over there during his three-year Army enlistment as a Special Forces medic.

Yet, he has possibly seen more hotspots than a California firefighter.

It helps to have a world atlas to track all the countries he covered during his AP career as a foreign correspondent.

From wars to revolutions to superpower summits, he's been on the ground covering them.

From the Vatican to the Olympics to World Cup soccer, he had a front row seat on history.