By Whom Was Your, Best Christmas Present Ever, Wrapped? 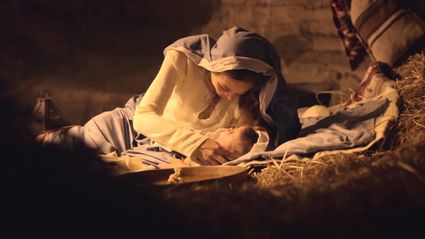 Part of the fun of Christmas is wrapping the presents and especially for that "special" someone in your life. Even the wrapping has to be special. Then there's that moment we've been waiting for as we get to watch that special person unwrap the gift. And it's even more special if the gift is something they've really wanted or needed. And if the receiver is a child, most likely it's something they could not afford to get for themselves. Surprise!

So, how about you? What was the best Christmas present you've ever received, and was the wrapping special?

I want to suggest that the best Christmas present you've ever or will ever receive was (or will be) is the first Christmas present ever given. Let's look into it. A long, long time ago, before time began actually, this "Best Gift" decision was made by – God! It was carefully chosen and specially wrapped. Let's examine this in the book of Luke.

Luke tells us that "God sent the angel Gabriel to Nazareth, a village in Galilee, to a virgin (a young teen) named Mary. She was engaged to a (godly) man named Joseph, a descendant of King David." (Luke 1:26,27)

Luke continues: "Gabriel appeared to her and said, 'Greetings, favored woman! The Lord is with you'" (verse 28). Mary's reaction was what you might expect, verse 29: "Confused and disturbed, Mary tried to think what the angel could mean." "Don't be frightened, Mary,"the angel told her, 'God has decided to bless you!' 'You will become pregnant and have a son, and you are to name him Jesus. He will be called the Son of the Most High. And the Lord God will give him the throne of his ancestor David. And he will reign over Israel forever. His kingdom will never end'" (verses 30-33). Now Gabriel's first explanation from the pen of Luke is primarily for the Jewish people, but hang on, Gabriel's not done yet.

Verses 34,35: "Mary asked the angel: 'But how can I have a baby: I am a virgin!'" The angel replied: "The Holy Spirit will come upon you, and the power of the most High will overshadow you. So the baby born to you will be holy, and he will be called the Son of God."

Now here's the "Best Christmas Present Ever" analogy. The best Christmas present ever is the Gift of God's Son: The Son of the Most High, "the Son of God," Jesus. Now how will God "wrap" His special Gift of all gifts? God's "special wrapping" of choice will be a young Jewish girl by the name of Mary: "Greetings, favored woman! The Lord is with you." No other "wrapping" will do. Think about it. Out of all the possibilities God chooses a "small town" girl from a home of humble circumstances. Jesus will not be either conceived, or born in a large city like Jerusalem, the "Holy City." Let's examine the "wrapping" God chose for his Son. Mary is a young lady of high moral standards. She asks the angel' "How can I have a baby, I am a virgin?" Mary's morality is God's choice for every young lady. Mary has a deep commitment to God: the kind that overshadows the way she lives. She responds to the angel: "I am the Lord's servant, and I will accept whatever he wants"(Luke 1:38).

And in this statement we hear that Mary is a young lady of courage. Her words that day will begin to sink in as she deals with the public opinion that she is becoming an "unwed mother." Understandably her fiance, Joseph struggled with this. Matthew records: "Joseph, her fiance being a just man, decided to break the engagement quietly, so not to disgrace her publicly" (Matthew 1:19). God wanted courage to be part of the wrappings surrounding his Son in the womb. A commitment to God should not be seen as an easy commitment – in more ways than one it will cost us our life. But God addresses Joseph's concern. Matthew writes: "As he considered this, he fell asleep, and an angel of the Lord appeared to him in a dream. 'Joseph, son of David, the angel said, do not be afraid to go ahead with your marriage to Mary. For the child within her has been conceived by the Holy Spirit. And she will have a son, and you are to name him Jesus.'" for he will save his people from their sins,...When Joseph woke up, he did what the angel of the Lord commanded. He brought Mary home to be his wife, but she remained a virgin until her son was born. And Joseph named him Jesus." (Matthew 1:20,21, 24,25). Jesus grew up in a home of courage. From an earthly standpoint the courage displayed by his parents may have been echoed in his prayer on the night he was arrested: "Father, if you are willing, please take this cup of suffering away from me. Yet I want your will not mine" Luke 22: 42). When a child is unwrapped from the womb, what they become is greatly influenced by their parents.

A strong part of the wrappings of Mary's life was the Word of God. This is seen in the song that burst forth from her lips when she was with her relative Elizabeth, who was the mother of John the Baptist (or baptizer). Mary went to visit Elizabeth shortly after the visit from Gabriel. Her song has become known as, "The Magnificant" (or Mary's song) and it is filled with scripture pouring from her heart. A pastor out of the past, George Morrison (1866-1928) put it this way in his message, "The Mother of Our Lord." "The words are scarcely Mary's words at all; they are from the treasury of psalmist and prophet. 'My soul doth magnify the Lord' – that long ago had been the cry of Hannah. He hath showed strength with His arm-- that is not Mary's, it is David's. And they are words of Job, in the Magnificat, and thoughts taken from the song of Moses, and golden utterances of Isaiah" (Classic Sermons On the Birth of Christ, p.23). The Gift of God's Son would be wrapped with Scripture from his mother's life.

The Gift of God's Son would be "unwrapped" in a borrowed stable in the little town of Bethlehem for there was, "no room" (for them) in the village inn. His mother laid him in a manger (an animal food box), wrapping him in "swaddling clothes" (a blanket for newborns) while most likely speaking softly to him words which were too personal to be recorded, while he looked up into his mother's moist eyes, his first glimpse of the depth of his mother's love for her son, our Savior!

When Joseph and Mary brought the baby Jesus to the Temple to present him to the Lord on the eighth day of his life on earth, a man by the name of Simeon...took the child in his arms and praised God, saying, "Lord now I can die in peace! As you promised me, I have seen the Savior you have given to all people. He is a light to reveal God to the nations, and he is the glory of your people Israel!; Then he said to Mary: This child will be rejected by many in Israel, and it will be their undoing. But he will be the greatest joy to many others. Thus the thoughts of many hearts will be revealed. And a sword will pierce your own soul" (Luke 2: 28-35). And so it would be and so it was. "I am the Lord's servant, and I am willing to accept whatever he wants."

Our last glimpse of Mary is at a prayer meeting shortly after her resurrected Son returned to heaven. Luke puts it this way in Acts 1:14: "Then all (Jesus followers) met together continually for prayer, ALONG WITH MARY, THE MOTHER OF JESUS, several other women and the brothers of Jesus." The wrappings of Mary's life included a heart for prayer.

Have you received God's Greatest Gift? It was unwrapped for you too, you know!