A Walk-Through with Superintendent Tom Jerome 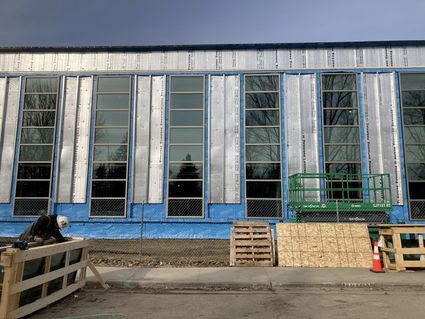 From the outside at the construction site just feet away from the southeast building at Roseau High School, only the blind will never be able to see the individual columns of glass.

These are tall windows - going upwards for two floors - that catch the eye, much like a series of vertical rainbows.

But all of them are stationary.

None will ever allow in the sounds of an ambulance's siren, some mutt barking in a nearby backyard, or a hornet flying into a classroom through an open window.

Always, they were distractions that teachers had to endure. Some were even opportunities for life's little lessons about death or how it might feel to be chained to a tree.

Before the 1912 main building was leveled in the early 1990s, there were no screens on the old-fashioned double hung windows that students would gawk out of - maybe whistling at a girl or calling out to a pal.

There is a new era now.

But you can't open the windows.

"No, the windows won't open," he said, adding that there will be no air conditioning, either.

He explained that fresh air will be circulated into the building when necessary.

"You're not going to see windows opened anymore in this school."

Inside the building, there are two new hallways that are as wide as the neighboring streets.

"The old hallways were small," he said about this building, first gutted inside and then expanded to the south and to the west last fall while leaving the east wall intact.

It is now taking shape and will be markedly different from the previous structure.

"Students won't be traversing shoulder to shoulder from one classroom to another with no room," he said, mentioning that these hallways will be almost three times as wide as they had been.

He walked along the first floor pointing out the new elevator shaft and the bathrooms that will be available on both floors.

On each floor are wider classrooms, all with natural lighting that will vary depending on the time of the day, the seasons, and the direction of a particular classroom.

"On each floor will be six classrooms that will host English, social studies, foreign languages, and health," he said, noting that the other two classrooms will be for special education.

"Of particular interest, the sunlight that enters each classroom will flood out to the hallway, which will be the central gathering point," he said.

All new will be the flexible seating in the hallways, which will provide additional learning environments for students to exit the classrooms and work independently in groups.

"Our learning will no longer be confined to the small classrooms that we have been used to with poor air quality and very little flexibility," he said.

By May, the building will be mostly completed.

On the second floor, Mr. Jerome pointed out a Special Education room with an adjoining room for individualized work and a smaller one for testing.

Soon, it won't look like a giant erector set after the walls are sheet-rocked and more floor to ceiling glass is added to the classroom walls facing the hallway.

This is all part of Phase 1.

"Phase 2 is everything else. But within Phase 2, there is a sequence. April 19 is the targeted date for Kraus-Anderson to start on the gymnasium. All next school year, this will be an active construction site," he said, anticipating that Phase 1 will be wrapped up by the end of the school year.

"Our students will be attending school in these classrooms next fall," he said, noting that it will be a more comfortable environment with all the floors carpeted.

How many entrances will be included in the school?

"It will be greatly limited. Safety and security are a priority, and we are shrinking access points to this building. Everyone coming into this building will funnel through a checkpoint, whether it's at the elementary or the high school," he said, explaining that there will be two main entrances.

Standing in an unfinished upstairs classroom, he pointed to the west toward the old gymnasium.

"Now, when everything is done, windows are going back into the gymnasium where they used to be. There is a real focus on natural light and energy coming into these classrooms, and the gymnasium is an extended classroom," he said, adding that all of the exterior walls will remain in Phase 2 of the multi-million dollar renovation.

"That's going to save us about a quarter of a million dollars of taxpayer dollars. But we'll have a new gymnasium roof, and everything will be new."

The locker rooms will be where the music rooms used to be.

He knows it all by heart.

Even the gymnasium playing surface will be at a different angle, and the stage will be gone.

"The new music suite will go where the old cafeteria is," he said, agreeing that the public will need a tour of the facility in another year or so.

They won't recognize the old schoolhouse.