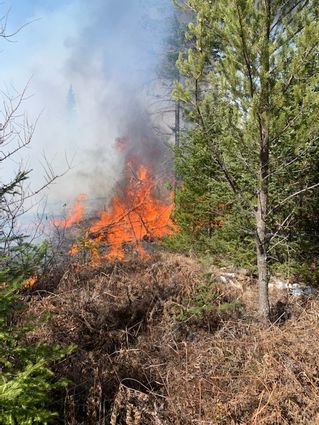 The fire just after DNR firefighters arrived on the scene

He doesn't require a meteorologist to know that the fire danger has reached the danger level.

A week ago Monday, March 29, Mr. Ziska, who has a healthy appreciation for enough moisture to green everything up, was paying attention to the smoke bellowing from a nearby fire on the Palsburg Road.

Fortunately, it was blowing away from his residence.

The question of how the blaze started appears to cast doubt on one source of the fire.

"I talked to one of the firefighters from Bemidji and he said,...