With Captain Provance at the Century Mark 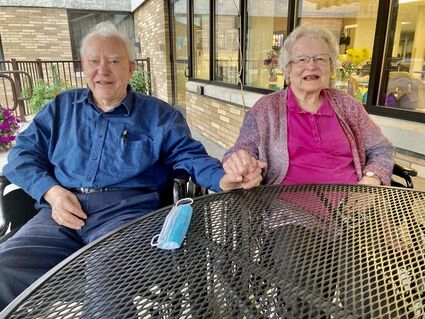 Bill and Gladys without their masks

On Wednesday, July 28, the nursing staff rolled them out in wheelchairs - Captain William "Bill" Provance, an old Army Air Force B-25 pilot, and his bride of 71 years.

The captain looks like he could have played noseguard on his high school football team.

He was raised as a farm boy over near Hillsboro, North Dakota, and he sat there with Gladys, who is 95 and is still plenty sharp, too.

Only some dates escape them.

They were asked how long they have been married and Bill asked her, "You remember?"

She most certainly did.

"Seventy-one years," she said without hesitation.

When it was noted that she had married an older guy, they both laughed.

"We got married after the war," said Bill.

He was first drafted into the Army as a motorized infantryman.

"I wanted to fly," he said, explaining how he ended up in the Army Air Force flying B-25 bombers.

He took his flight training at Sheppard Air Force Base in Texas while initially learning to fly a biplane.

"I didn't get into combat," he said, and whether that was a regret he never said.

He was a very good pilot or they never would have assigned him to be a flight instructor.

Did you go back to North Dakota?

"No, I picked her up and we got married."

"We went to North Dakota Agricultural College in Fargo," she said.

They have an easy banter.

"I never actually farmed after I got out of the Army," he said.

Where'd you go on your honeymoon?

"To Montana and Glacier National Park," she said, adding that they first cast eyes on each other in a class called "Club Organization and Procedures."

They have six children and lived on the east end of Roseau.

Get along pretty good?

They were sitting outside on a patio with occasional birds singing.

You have a nickname for Bill?

"I don't think so, but he calls me Shrimp all the time."

"Are you taller than Gladys?

"I did work for the Citizens State Bank for a period of time," he said.

It's been a long life for both of them.

"He was in the Veterans Hospital in Fargo," said Gladys.

"Dad was in the First World War," he said.

For the record, according to Carol Tillberg, the local military historian, his dad, William, served as a medic in France in World War I.

What's the trick to a long marriage?

He laughed and she giggled.

"You just have to stay alive," he said, and moments later, she put everything in perspective.

"Well, we married the right person."

There was no argument from Bill.

"We've had a wonderful marriage," he said, adding that she's a downright good cook.

"They take very good care of us here," said Gladys. "That's why we came over here. We couldn't take care of ourselves any longer."

They sat holding hands and enjoying each other's company.