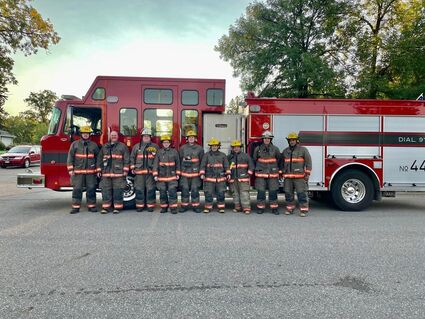 Some of the members of the Roseau Volunteer Fire Department

Roseau Fire Chief Craig McMillin chuckled when it was noted on Monday that there are a lot of short firemen in his department.

"We got some big guys, we got some small guys, and we try to find guys that will fit in small holes."

"Sometimes just being short helps, too," he said.

Dan Halstensgard is the newest member of the Roseau Volunteer Fire Department. He joined up this past summer.

"He's got all kinds of training to do, and we have a handful that are looking to retire. So, we're looking for new recruits," he said, adding that living in Roseau is key.

The meal is being served "to go" in the parking lot to the north of the fire hall on Saturday, September 18, from 5 p.m. to 8 p.m.

The meal is $10 for everyone over five years of age. Five and under eat free, and no one will have to produce their birth certificates.

"We are still having a dance at Gene's afterwards," he said, remarking that there was a great community response a year ago and the grub went quicker than usual.

"I would suggest that everybody come early. Our raffle ticket sales have been very brisk and if that's an indication, we should have a good turnout."

Chief McMillin noted that the general public can buy their raffle tickets from any of the local firemen.

"This is our only fundraiser. A lot of the fundraising money is used for what a firefighter needs," he said.

"This helps offset some of the costs to get nicer equipment. I think we're one of the strongest fire departments around. I think anyone would agree with that because of the way we manage our money and how we look at purchasing new stuff that we need."

What does it cost to suit up a firefighter?

"Our equipment costs to outfit one firefighter is over $4,500, and it needs to be replaced every five to seven years on average."

That does not include the cost of the self-contained breathing apparatus (SCBA) and cylinders (air packs) for each fireman.

"Anytime we go into a building, we're wearing full SCBA masks with the air on," said the chief, explaining that as their air packs expire or begin to fail, they will need to replace them with the newer version.

"The new National Fire Protection Association (NFPA) pack design will no longer match any of our existing or other packs," he said, adding that when that happens, they will have to replace their air apparatus system.

Then, he mentioned another priority, which is replacing a number of their antiquated radios, which cost $3,300 for a hand-held one and $4,000 to $6,000 for a vehicle-mounted unit.

Chief McMillin and all the Roseau Volunteer Firemen look forward to your attendance.

As always, Oliver Ullman, a veteran firefighter and a distinguished chef in his own right, guarantees it will be a meal second only to Thanksgiving.

"If you think that the new Burger King in town is popular, you haven't tried our cooking yet!"