Roseau Girls' Tennis Loses in the Section 8A Quarterfinals 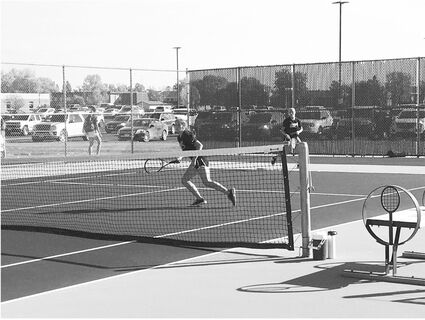 At 3rd doubles, Marissa Glodowski (at the net) and Emma Johnson (on the baseline) track a ball and get set to hit a return during their 6-1, 6-1 win in the Section 8A Team Tournament against Wadena-Deer Creek.

After a regular season that saw the young Rams focus on learning and improving, the girls entered the playoffs as the #5 ranked team and opened play against the #4 seeded Wadena-Deer Creek Wolverines. Wadena had hosted Roseau in a match in August, a contest that went 6-1 in the Wolverines' favor, so the Rams hoped to gain some ground in their playoff matchup.

For the first time in many years, the quarterfinal round in the Section 8A tournament was played outdoors at home sites, so the Rams made the trip to Wadena for the match. Unfortunately, both the location an...