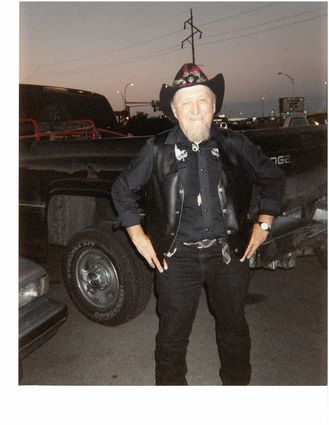 Theodore "Ted" Curfman was born February 17, 1951 in Fosston, the son of Glenn and Mary (Baustian). He grew up on a farm by Fosston. Ted graduated from Fosston High School. Following graduation, Ted moved to Minneapolis and got a job the very next day.

In December of 1969 Ted was united in marriage to Deborah Harthun in Fosston, and together they had three children.

In 1992 Ted married Rebecca Pagnac in Fosston. They raised their daughter Renee together. During this time, Ted also started bringing his mules to different events – giving rides to people of all ages.

On April 1, 2007 Ted was married to Jan in Prescott, Ariz. With God in their relationship they had a spiritually enriched 12 years together, serving the Lord and community.

Ted had many different occupations: he wanted to be a farmer, but his Dad passed when he was 16, so he did construction, scrapping iron, working with the beet harvest, was a rural mail carrier, did some farming, was an auctioneer, and served in the National Guard.

Along with his wife, Jan, Ted was co-owner and co-operator of Curfman's Critters. Together they worked side by side for 12 years. Ted was very passionate about his mules and cared for all of them. Ted was also known for his horses and the pony rides at fairs. 20 years ago he bought his white mules – George and Gracie in Missouri. He had a JD Covered Wagon, a sleigh, stagecoach, large red white and blue Trolley Wagon. Ted even built a smaller trolley. In 2016 alone, Ted and Jan had 36 events – bringing Curfman's Critters to town parades, weddings, birthdays, and more.

Ted enjoyed his volunteer work. He helped with the TRF Area Food Shelf where he helped with fundraising, volunteering, and delivered and handed out food at distributions. Ted was a large help in the search for the current building. He also played Santa at the Holiday Train, provided equipment for the fair parade, and traveled to Haiti where he built chicken farms with the church. His other favorite volunteer work included helping with church activities, the Big Brother Little Brother Program, St. Hilaire Lions Club, the Sons of Norway, and was a sober companion for several people in AA.

Ted's relationship with his Lord Jesus Christ was very important to him. A man transformed - in 2006 he walked in to the Evangelical Free Church in Thief River Falls and asked the pastor to pray to have his anger gone. Ted was truly transformed and from then on he was on "Fire for Christ." He was baptized on July 2, 2006 at 12:21 p.m. in Sand Hill Lake, near Fosston.

If you want to do something for Ted, his desire is for everyone to accept Jesus as their Savior and to join him in Heaven.

He was preceded in death by his parents, Marvel "Glenn" and Mary Curfman; grandparents, Sophie and Alfred Curfman and John and Theresa Baustian; sister, Audrey Simmons; nephew, Dustin Simmons, and grandson, Travis Curfman.

In lieu of flowers, memorials preferred to Love a Child at P.O. Box 60063, Fort Myers, FL. 33906 or online at http://www.LoveAChild.com Love is Something You Do!