Polaris Has a long history 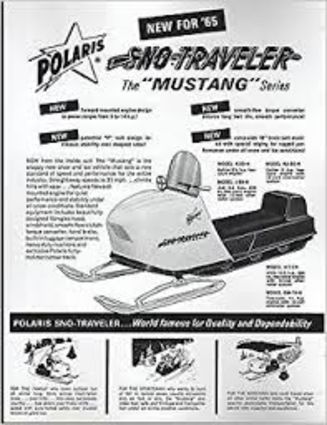 1944: Edgar Hetteen establishes his first business, Hetteen Hoist & Derrick in Roseau, Minnesota. The business operates from a building that was once a rural dance hall, the Pine Needle Inn. The structure had been moved into Roseau before Hetteen moved in.

1946: Following his discharge from the Navy, David Johnson joins Edgar as a business partner. While in the service, David had invested in Edgar's company by sending home money from his Navy paychecks.

1946: Allan Hetteen, Edgar's younger brother, begins working for the company. Edgar and Allan Hetteen and David Johnson form the nucleus of what will become Polaris Industries.

1954: On July 21, the company is renamed and incorporated as Polaris Industries Inc. The name "Polaris" – the North Star – refers to the company's location on the northern border of Minnesota. The new, less product-specific name reflects the company's flexibility to produce and service myriad products.

1956: The first Polaris snowmobile is driven for the first time by Orlen Johnson, who built the machine with David Johnson and Paul Knochenmus. The machine was soon sold to area lumberyard owner H.F. "Pete" Peterson for $465 to help the Hetteen company meet its payroll.

1956: Allan Hetteen builds snowmobile No. 2, the oldest Polaris snowmobile still in existence. It is housed in the Polaris Experience Center in Roseau.

1956: Onlookers are impressed as David Johnson demonstrates the speed and power of the Polaris snowmobile at the annual Trappers' Festival in The Pas, Manitoba.

1957: A truckload of Sno-Travelers are shipped to Alaska, which will become a significant proving ground for the early snowmobiles.

Throughout the 1950s: Polaris produces a variety of farm equipment such as grain elevators and straw choppers and serves as a service shop, doing welding and general repair work – anything to help pay the bills – primarily for Roseau-area farmers.

1959: The "Swamp Buggy," a variation on a snowmobile, is manufactured. In warm-weather months, it rolls on large wheels. In winter, it crosses the snow on a set of snowmobile tracks.

1959: Polaris Industries holds its first annual meeting. Along with the three principles, the board includes two outside directors. In the year ahead, the company will reorganize and issue stock.

1960: Edgar Hetteen and Erling Falk of Roseau, and Rudy and Bessie Billberg of Alaska ride three Sno-Travelers 1,200 miles from Bethel to Fairbanks, Alaska, in 21 days. Edgar expects the trip to generate publicity that leads to sales. It creates publicity nationwide, but it also angers the two "outsiders" on the board, and Edgar resigns as president.

1960: Edgar Hetteen moves to Alaska. Within a year, though, he returns to Minnesota and in Thief River Falls he opens a Polaris competitor, Arctic Enterprises, which produces Arctic Cat snowmobiles. To this day, Edgar remains the only person in history to start two snowmobile companies.

1962: International sales thrive as three truckloads of snowmobiles roll out of the factory, ready for shipment to Sweden.

1963: In the spring, Allan Hetteen and David Pearson test the new front-engined Comet, set for release as a 1964 model, on glacial fields near Mt. McKinley in Alaska. The machine performs beautifully.

1963: The first sales meeting is held for approximately 200 Polaris dealers from across North America who order the new 1964 models.

1963: In the early winter, Polaris learns that while the Comet worked on glacial hard-pack, it doesn't work on snow common to the snowbelt. Numerous components fail on hundreds of Comet models, forcing the company into a costly recall/repair program.

1964: Polaris introduces the Mustang, a sporty, front-engined snowmobile that greatly expands the recreational appeal of snowmobiling.

1966: Herb Howe wins the first Winnipeg to St. Paul 500-mile Winter Carnival race on a Colt and Polaris racers finish 1st through 5th. (Polaris racer Gerry Reese won the race in 1967; and numerous Polaris racers have won versions of the I-500 since then, making Polaris one of the most dominant brands ever in terrain racing.)

1968: The new 1969 snowmobiles are introduced and for the first time some models use engines supplied by Fuji Heavy Industries. Within three years every Polaris snowmobile will have a Fuji engine.

1968: On July 31, Polaris stockholders approve the sale of the company to Textron. Polaris had attracted several potential buyers. Textron was chosen with hopes it would invest in Polaris to fuel its growth and provide Roseau-area employees with job security.

1970: LeRoy Lindblad wins the first of his two consecutive Winnipeg to St. Paul I-500 Races.

1970: On June 1, Allan Hetteen retires as president and is succeeded by Herbert C. Graves III, the first Polaris president based in Minneapolis rather than Roseau.

In the 1970s: The snowmobile industry was saturated with manufacturers –there were 123 brands of snowmobiles at one point – and there was a glut of unsold machines. Companies left the business by the score, while manufacturers such as Polaris fought through tough market conditions. Making matters worse were inflation, the nation's gas shortage and several low- and no-snow winters.

1973: While helping a neighbor on November 24, former President Allan Hetteen dies as the result of a tractor accident in rural Roseau.

1976: The TX-L 340 uses the first Polaris liquid-cooled engine and is popular with both cross-country racers and recreational riders.

1976: Beverly F. Dolan is promoted to president Textron's Homelite Division and is succeeded by David F. "Fritz" Myers as president of Polaris.

1977: Archie Simonson wins the Winnipeg to St. Paul I-500 race as nine of the first 10 racers ride Polaris sleds.

1978: On February 26, popular and successful Polaris racer Jerry Bunke – part of the legendary "Midnight Blue Express" – dies as the result of a racing accident in Beausejour, Manitoba, Canada. Polaris soon after ends its factory racing program.

In the late-1970s: Textron purchased Polaris in 1968 because the snowmobile business was growing and profitable. But snowmobile sales crested and fell in the 1970s. By the end of the decade, Textron was extremely eager to sell Polaris, which had become an unprofitable division. When Textron named W. Hall Wendel as president of Polaris in 1980, one of his assignments was to sell Polaris. Wendel succeeded in ways Textron management, in 1980, could never imagine.

1980: Bruce Olson wins the I-500 cross-country snowmobile race, the first victory on a Polaris "Indy" model.

1980: Management of Textron, which owns Polaris names W. Hall Wendel, Jr., president of Polaris, a promotion from his role as Vice President of Marketing for Polaris/E-Z-Go. One of his assignments is to sell Polaris as the entire snowmobile industry suffers from low-snow winters.

1981: Low-snow winters plague the snowmobile business and Polaris is forced into layoffs at its Roseau facility. Only about a dozen employees are retained to maintain the plant in hopes that production can resume.

1981: Polaris offers 3-wheeled ATVs to Cenex, a farm cooperative, and to John Deere. Polaris proposes branding the machines for these customers, red ATVs for Cenex and green ones for Deere, but the sales do not materialize.

1987: Polaris is sold to a limited partnership called Polaris Industries, L.P., and Polaris stock begins trading on the American Stock Exchange under the symbol “SNO” at $20 a share.

1988: Polaris co-founder David Johnson retires after 42 years with the company.

1989: The Polaris Indy 500 is named “Snowmobile of the Decade” by SNOWMOBILE Magazine.

1989: Polaris celebrates its 35th anniversary with a huge party at Roseau.

1996: Corey Davidson wins the I-500 cross-country snowmobile race and Troy Pierce and Todd Krikke win the Soo I-500 enduro race, their first of two-straight Soo victories.

1997: A state-of-the-art distribution center opens in Vermillion, SD, for distribution of parts, garments and accessories.

1997: The Victory motorcycle is introduced as Indy car champion Al Unser, Jr., rides a pre-production V92C into a packed Planet Hollywood at the Mall of America in suburban Minneapolis.

1998: Polaris expands its off-road business with the Polaris RANGER side by side vehicle.

1998: Joe Klein of New Jersey is the first to ride a Victory V92C coast to coast. He rides from Manhattan to San Francisco on his “Rock to Rock” ride.

1999: The Victory V92C is named Cruiser of the Year by Motorcycle Cruiser magazine.

2000: Polaris founder Edgar Hetteen, his original partner David Johnson and a group of Polaris officials retrace the route of Edgar’s 1960 Sno-Traveler trek across Alaska on the “Breaking Trail 2002” ride.

2001: Historians Allan Maybee and Roger Melton ride Genesis I watercraft 5,100 miles from New Orleans to the Pacific Ocean, tracing the route taken by the Lewis and Clark expedition in the early 1800s.

2002: After receiving nearly 12 inches of rain over a June weekend, Roseau endures a devastating flood. City residents and volunteers from throughout the region work 24/7 for weeks to save the Polaris facility, the city hospital and the school.

2002: SnoWest magazine names the 2003 Indy 800 RMK Vertical Escape the “Sled of the Year,” one of numerous SnoWest awards won by Polaris deep snow sleds over the years.

2003: A group of women snowmobilers raises more than $120,000 to fund breast cancer research during the first Way Out Women (WOW) Relay ride across Canada, of which Polaris is the chief sponsor.

2004: Polaris introduces the 900 Fusion™ and 900 RMK, a new generation of high-performance snowmobiles with the sophisticated Polaris IQ™ chassis.

2007: Polaris introduces RANGER RZR as first trail-capable & fastest acceleration side by side vehicle.

2009: Polaris introduces the all-new PRO-RIDE snowmobile platform and suspension on the new 2010 600 RUSH model. The innovative PRO-RIDE rear suspension is a true progressive-rate suspension that delivers the best ride and overall performance on snow. Snow Goer magazine names the 600 RUSH as the 2010 Snowmobile of the Year.

2010: The RANGER EV wins Best of the Best honors from Field & Stream.

2011: On New Year’s Eve before the start of 2012, Polaris snowmobile racer and freestyle specialist Levi LaVallee sets a snowmobile distance jump world record with a leap of 412 feet in San Diego, California. He smashes the old mark of 361 feet, which he set in 2010.

2012: Snow Goer magazine names the Polaris 800 PRO-RMK 155 the 2013 Snowmobile of the Year. The editors praise the sled for its innovative technology and add, “it also just happens to be the best mountain snowmobile available. That makes it our King of the Hill – in the mountains, and in the snowmobile market for 2013.”

2012: Polaris in September breaks ground for an expansion of the Wyoming, Minnesota, Product Development Center. The 144,000-sq. ft. expansion doubles the space at the facility, which is home to several product engineering groups. Engineering teams move in and start working in the new space in mid-2013.

2012: In December, Indian Motorcycle releases audio of the brand’s new engine, and at Daytona Bike Week in March 2013, the all-new Thunder Stroke 111 V-Twin is unveiled and run in public for the first time.

2013: At the Sturgis Motorcycle Rally in August, the all-new 2014 Indian Motorcycle models are revealed to the public for the first time. The 2014 model lineup includes the Indian Chief Classic cruiser, Indian Chief Vintage bagger, and Indian Chieftain with hard saddlebags, a formed fairing, and extensive electronics.

2014: Polaris defines another new off-road vehicle segment with the introduction of the Sportsman ACE. It features a unique new single passenger cab design, and automotive-style controls, including a steering wheel and foot pedals.

2018: Polaris acquires Boat Holdings, a privately held boat manufacturer of four recognized brands – Bennington, Godfrey, Hurricane, and Rinker. Polaris is named to the Fortune 500 list for the first time, making its debut at No. 496. Polaris introduces the RZR RS1.

2018: Polaris breaks ground on new multi-brand distribution center in Fernley, NV, which is scheduled to open in 2019.