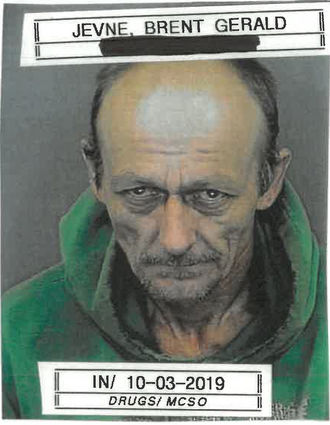 A Strathcona man has been charged in Marshall County District Court after he allegedly possessed 65.4 grams of methamphetamine and 13 firearms.

Brent Gerald Jevne, 48, has been charged with felony first degree possession of a controlled substance and gross misdemeanor possession of ammunition/any firearm after a previous felony conviction.

The charges stemmed from the execution of a search warrant at Jevne's home, 43283 Center Ave., on Thursday, Oct. 3, according to the complaint. Members of the Pine to Prairie Task Force, as well as three Marshall County sheriff's deputies and K-9 Eva, conducted a search of the property. They allegedly found three separate monitors showing video surveillance of the property. Law enforcement also found 65.4 grams of meth, 13 firearms, numerous rounds of ammunition and multiple items of drug paraphernalia.

The complaint indicated that Jevne had been previously convicted of a felony fifth degree controlled substance crime in 2005. As a result, he is precluded from possessing firearms or ammunition.