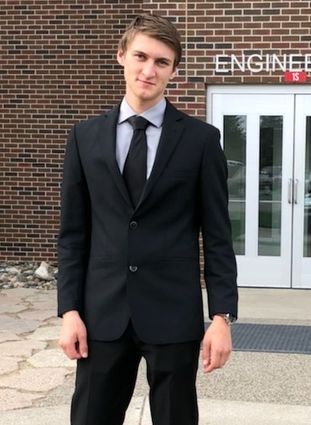 Roseau- Pierce James Kvien was born on January 12, 1998, in Roseau to Patrick and Kristi. He joined his twin siblings Parker and Kalleen and the fun began.

Pierce was baptized and confirmed in the Catholic faith at Sacred Heart Catholic Church in Roseau. From kindergarten through graduation in 2016, Pierce attended Roseau School. In high school, he was a member of the cross-country and track teams. As a junior, he competed in the high jump and in the 4 x 800 relay. The relay team made it to the 2015 state track meet, where Pierce helped his team set a school record. He brought his knowledge of mechanics to the Robotics team and placed highly in the Skills USA competition. Pierce was also active in boy scouts and especially enjoyed learning how to camp in the wilderness.

After high school, Pierce went on to graduate from Itasca Community College in 2018 and was furthering his education at North Dakota State University, where he made the Dean's list and was set to graduate in December 2020 with a degree in Mechanical Engineering. He completed several engineering internships with Polaris at the Roseau and Wyoming, Minnesota, locations and had recently completed a summer internship at ComDel Innovation in Wahpeton, North Dakota.

From a young age, Pierce had a curiosity about how mechanical things work. He started taking apart old toasters and radios at the ripe old age of four, then graduated to four-wheeler engines at age ten. By the time he was a teenager, he was rebuilding and repairing tractors, cars, motorcycles, snowmobiles, and jet skis. Pierce had the knack of figuring out mechanical problems and how to fix or improve any machine.

Pierce had a zest for life and was a jack of all trades. He had a passion for everything he did whether it was riding snowmobile, building parts, or taking his new puppy Nelli on two walks a day. He enjoyed camping, hiking, and exploring the world. He was always so authentically himself, from the beer he drank to his wide range of outfit choices, which ranged from grease-covered jeans to lululemon joggers, but his favorite was his American flag shorts. Pierce cared deeply for his friends and family. He loved hanging out with friends on a Friday night with a warm Hamm's in his hand.

A Mass of Christian Burial for Pierce Kvien of Roseau, was held on Friday, August 21st at 10:30 a.m. at Sacred Heart Catholic Church in Roseau.  A visitation was on Thursday evening from 4-7 p.m. with a 7:00 prayer service at Helgeson Funeral Home in Roseau. MN State Guidelines were followed with capacity of 50% and face coverings for both events.  Interment was at the PineCreek Cemetery in rural Roseau.  In lieu of flowers, memorials are preferred. Online guest book at: http://www.helgesonfuneralhome.com