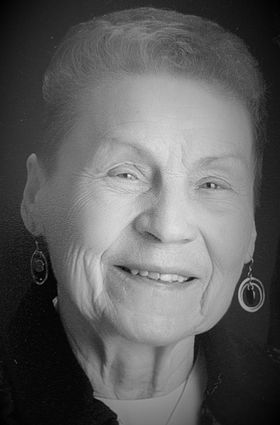 Roseau- Eleanor Lillian Johnson, age 90, died on August 10, 2020 at her home at Oak Crest Senior Housing in Roseau. Her family is grateful for the compassionate care from Shana Lanctot and the Oak Crest staff. Eleanor leaves a legacy of love and acceptance of others, boundless commitment to family, strong faith, community involvement, and her famous hugs.

Eleanor was born in St. Johns Township, Kandiyohi County, on April 15, 1930 to Rudolph and Luella (Olsen) Knochenmus. The family moved to Roseau in 1933. When Eleanor was four years old her mother died from childbirth complications. Two years later Rudolph married Emma Qualey, a widow with two children. He died unexpectedly one month later. Emma was unable to care for all the children and though county social services tried to keep them together with relatives and in foster homes, the children became separated. When Eleanor was eight her social worker contacted Elof and Alice Rud, farmers in Warren, asking them to adopt her. During the trial stay she asked if she could call them Mom and Dad and they decided to adopt her. Eleanor spoke of the next two years as the best years of her childhood. Her life was surrounded by Alice's love.

Eleanor particularly remembered their first Christmas together. Her dad made her a play cupboard and painted it white with red trim. She also received a tea set and her first doll. She memorized her Christmas piece and "O Little Town of Bethlehem" for the Sunday School program. She learned to cook, can, sew, play the piano and keep an immaculate house. She recalled coming home to fresh rolls and having devotions by the kerosene lamp. And, she could have long hair with braids. She told many stories from this time that shaped her life.

Sadly, when Eleanor was ten, just two weeks after her adoption was final, the house caught fire when Alice was lighting the stove. Alice was badly burned while trying to rescue Eleanor and died eighteen days later. Eleanor had to take over the housework and cooking in addition to helping Elof with field work, milking cows, and caring for the animals. Unable to keep the farm, Elof moved to Tacoma, Washington for work. Eleanor, now fourteen and starting ninth grade, went to live in Roseau with her sister Florence, to work and attend school. Eleanor and her siblings were eventually reunited, living in the Roseau community.

In the fall of her senior year Eleanor met David on a blind date. She said that in spending time with David she learned to laugh again. Less than a year later they were married on June 27, 1948 and honeymooned at the Northwest Angle. They would come to spend much time there over the years, creating special memories with family and friends.

David loved flying airplanes and taking trips in canoes, boats and on snowmobiles. At his side, Eleanor survived the aerobatics and the countless wet, cold and dark adventures. They were married 68 years and had four children: Mitchell (1949), Rodney (1952), Mary (1957) and Aaron (1974). Family and extended family were the most important part of their life together.

Two years after Eleanor and David were married, they attended a church service and together made a commitment of faith in Christ that guided them for the rest of their lives. They were founding members of the Roseau Assembly of God Church in 1954, (now Roseau Community Church). Eleanor played the piano and organ for 60 years, organized the Sunday School, kept the books, and was an Elder. She was very active in Christian Women's Club in later life as a regional leader. Eleanor was Deputy Sheriff for Roseau County from 1958-1970, working especially with children from broken families. She was involved in Polaris activities with David, Polaris' co-founder. She raced snowmobiles and rode Polaris vehicles well into her 80's.

Eleanor was known for her hospitality, excellent cooking, and welcoming all to her home. She impacted many people with her warmth, intelligence and grace. The greatest treasure of her life was being with family on holidays, especially Christmas. Whoever would show up was part of her family! In later years she loved the family Christmases at their remote Bear River cabin at the Northwest Angle.

Eleanor was preceded in death by her husband David in 2016, and grandson Jesse Schoff in 2019; her parents Elof and Alice (Johnson) Rud; her Knochenmus family, father Rudolph, mother Luella (Olsen), siblings Agnes, Paul, Florence, Jean and Louis; stepmother Emma (Qualey) Knochenmus and stepsisters Lillian and Ella. She is survived by her sister Irene (Knochenmus) Olson and sister-in-law Rosella (Dahlquist) Knochenmus.

Public graveside services for Eleanor were held on Friday, August 28, 2020 at 2:00 at the Malung Cemetery. State capacity guidelines were followed, with face coverings for all in attendance.

In lieu of flowers the family requests memorial donations to be made to either of the following: