Roseau Fire Department's 'To-Go Barbecue' Will Be a First 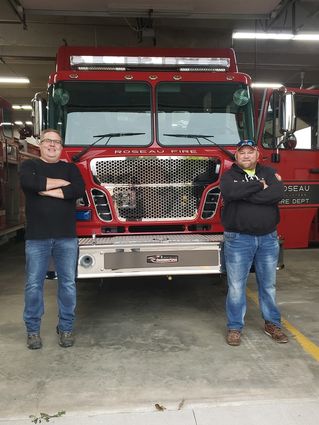 Last Saturday, Mark "Bubba" Bernat, a 1990 Roseau High School graduate and the assistant fire chief, noted that he will celebrate his 20th anniversary with the department in October.

Bubba is a big man with an even bigger smile. He likes helping people and mentioned that he got his present nickname the day he started in the Engineering Department at Polaris.

"Gary Shank gave me that name," he said, while mentioning how the annual event this Saturday won't have hundreds of the patrons dining inside the fire hall.

"It's drive through," he said. "We've got the raffle tickets the same as every year. We'll have them for sale as you come through."

Assistant Fire Chief Bernat is sold on this crew.

"I like the brotherhood and the camaraderie. They're a good group of guys," he said, adding that he lives about a mile from the fire hall.

How quick can you get dressed and out the door?

Do you mean that the rest of the time, if you weren't a fireman, you'd be sleeping naked?

"No, I'd be sleeping the same way. You're not going to trick me into that deal now," he said, roaring with laughter.

Last weekend, Troy Hammer, 47, added up his years of service.

"It'll be 19 years," said Mr. Hammer, who stepped down as an officer this past February so there'd be some new blood in the officer ranks.

He also comes charging to the fire hall when his beeper goes off.

What rankles some of the firemen is asking about their sleeping attire.

Do you still sleep in pajamas?

The question pertains to how long it takes to get to the fire hall.

"It doesn't take me very long. You gotta be fast or you're not going to make the truck because everybody's fast."

For a bloke who tips the scales at 250 pounds, he moves like a sleek halfback rushing in for the TD.

Take it from Mr. Ullman. You don't want to watch the trucks leaving the station with everyone waving goodbye and grinning.

It's a pride factor.

In an ordinary year, they'd be scrubbing the fire hall like a bunch of Army recruits waiting for a white glove inspection.

"We're trying to keep as much normalcy to our ball as we can and still follow guidelines," said Chief Craig McMillin, adding that they still wanted to have a meal for the community.

"That's kind of our way of saying thanks for all their support. We're going to continue with the meal, but it's going to be to-go only. We'll have to-go containers."

This Saturday, September 19, it will be a one-price-fits-all arrangement at $10 per meal. They will be serving from 5 to 8 p.m.

Besides responding to fires and accidents, they have been active with community outreach.

"It's been different because of the social distancing. We have different groups that come in, whether it's the Boy Scouts or church groups, and we'll talk to them about fire safety.

October is when they usually teach the younger kids about fire safety.

"We're not sure about that this year," said McMillin, who encourages families to educate themselves on multiple ways out of their homes and to designate meeting places for the family.

"Always have a plan for how you're going to escape and where you will meet," he said, adding that each family member should be aware of more than one exit during a fire in case one particular exit is blocked. They should also know exactly where they are to meet so everyone can be accounted for.

"We actually raise a lot of our own funds for things that we need," said the chief.

"We pay for a portion of our new vehicles with our fundraising money to offset some of the costs. It allows Roseau to be very well-equipped for not as much tax dollars."

For Chief McMillin, he couldn't ask for a better crew.

"We've got a good bunch of guys," he said, noting that a number of the firemen could never be jockeys.

"Ollie is not our biggest guy. I like to tease Ollie, but I'm probably just about as big as Ollie now," said Mr. McMillin, adding that he and Ollie joined the department in 2003.

These firefighters don't fade away like old soldiers. They're still rock solid on serving the community and outlying areas.

"We have 28 guys right now. Alex, my younger brother, has been here longer. Jeff Ballard, the old fire chief, is still a firefighter," said Chief McMillin, who is the oldest fireman at age 52.

"I'm the closest to the fire hall, which is probably a good thing because I'm also the one that's most out of shape," he said and chuckled.

"I'm about a block away. I usually take the vehicle. I've run up there a couple of times."

How long does it take to get your clothes on?

"I have to be fast because you're going to miss the truck if you're not in a hurry.

"Our response time is excellent. I know my first call I raced up there. I was up there almost faster than anybody and, by the time I got my gear on, the trucks had already left. You gotta be pretty fast to get on the trucks on the Roseau Fire Department."

He was asked if there are designated drivers or if anyone can drive.

"No, you have to be able to run the pumps if you drive."

Is that a special talent?

"It is a special talent because you've got guys who are counting on you for water because they are potentially in harm's way in a fire. The last thing we want is somebody who doesn't know what they're doing on a pump," he said, adding that they conduct training sessions on running the pump several times a year.

"We try to get everybody to have at least some experience doing it. But we only want the well-trained and the guys who are comfortable running the pump when somebody is in harm's way."

Their regular fire trucks show up with a thousand gallons.

"With our two water tankers, we can bring upwards between the two of them of about 6,000 gallons," he said, explaining that he is not a pump operator.

"I like to be on the front end of the hose, not the back end of the hose. At a big fire, we will run a two and a half inch hose and potentially another inch and three-quarter hose off of each truck."

How long would it take to pump a thousand gallon tank dry?

"One minute," he said. "If you don't have another water source, you can pump that truck dry in a minute with our deluge cannon."

He noted that with three hoses, it doesn't take very long to drain the tank.

"So, that's why it's so important for the pump operator to be watching his water, making sure that they can get more water on a rural fire or getting hooked up to a hydrant on a residential fire."

"It's nothing to spend up to a half million dollars on a fire truck," he said.

"We can actually support up to three accidents at one time in town. It sounds like it's a lot but once it gets icy, three accidents in a hurry is not unheard of. We're equipped to handle whatever we need to handle. We can attack three different fires," he said.

"We can attack three different accidents. We have the equipment for that. It all depends on the situation. And there have been a lot of times where we've had two fire calls at once."

That's why these volunteer firemen all coming running when the fire whistle and their beepers sound the alert.

They want to be on those trucks leaving the fire hall to help save somebody's home or somebody's life.