Firemen Declare It the best Turnout Ever 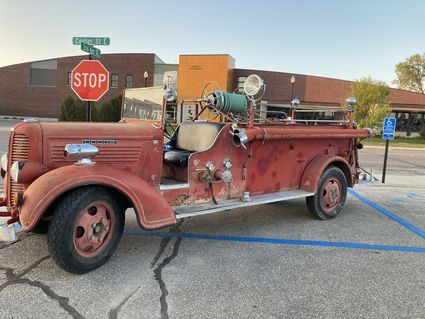 They never saw it coming, not by a long shot.

Suddenly, with more than a hour remaining on Saturday evening, the Roseau Volunteer Firemen ran out of grub at the their annual fundraising banquet.

The parking lot directly north of the fire hall had basically emptied, and the firemen looked like they had just won the lottery.

It was impossible to miss the firefighting McMillins or firefighter Ryan Murray and his wife Erin, who had been selling raffle tickets.

Alex McMillin joined the department at age 22 and has served for more than 25 years.

He was in awe.

"I don't remember one this big. The community is amazing, and what a perfect night. It couldn't have been any better," he said.

Chief Craig McMillin was spotted a little ways away with a smile.

"It was an excellent turnout. We couldn't be happier. Amazing support from the community! We're very happy," he said, adding that they had two lanes of traffic going through the parking lot during the drive through beginning at 5 p.m.

Mark Wilson, the treasurer for the Roseau Volunteer Fire Department, was reached by phone on Sunday evening.

"First off, the community support last night was tremendous. My goodness, we ended up serving close to a thousand meals."

He recalled that, in the years he's been assisting the fire department, they have never had a night where they served more than 700 meals.

"And to serve close to a thousand was truly amazing," he said. "Never in our wildest dreams did we expect the turnout last night."

He credits the community, which covers from Skime to Salol and thereabouts, for the fantastic turnout.

"If we had this in a normal year inside the hall, there's no way we are set up to serve that many meals that quickly," he said.

However, he noted that there was a crucial social aspect missing on Saturday evening.

"Not a lot of the guys with the department had a chance to see people. Those of us on the outside did, but half the crew were inside - either cutting meat or boxing up meals and didn't get to see the public as they normally would."

Mr. Wilson doesn't fight any fires, but he know numbers like a bookie knows the odds on the Vikings going into the tank when they're the favorites.

"The meal part of the evening certainly generated more revenue than we've had in many years," he said, adding that the raffle ticket sales were also excellent.

This is a community that keeps on giving.

"The fundraiser was a very successful evening, and this was a big night last night," he said. "Bigger than the fire department has had a chance to see in many years."

He commented that the volunteer firemen constantly say please and thank you when working for the public.

There is a mutual respect, according to Wilson.

"I suspect that we're still going to see some donations coming in over the next two weeks," he said.

While Mark does not come running when the fire whistle goes off, he understands why his comrades are held in high esteem.