Jesus Had No Wall To Pound His Fists Against! 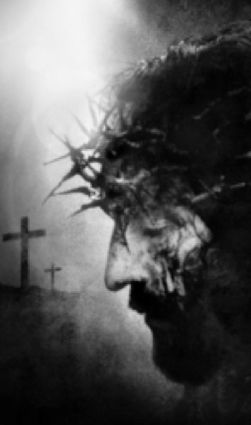 Have you ever experienced physical pain? Did you attempt to find relief; swallow something, pray that God would take it away?

Experiencing pain is part of life here in this broken world. And it begins early. I don't know why it comes back to me, but I remember, as a little child, occasionally getting a sliver in one of my fingers as a result of my play pursuits. Then it would have to happen. I'd have to go to my mother. She'd get out a needle and say, "Hold out your hand." Ahhh! And I'd start to cry in advance. "Oh," she'd say, "It's not that bad", and she began to "dig." In a few seconds it was over. "It's not that bad!" Yeah, right! I've learned over the years that pain is very personal. It's probably not helpful to give someone our personal pain opinion on what's going on with them. I try not to do that. So what's the point? Where am I attempting to go with all of this?

This weekend we remember the two greatest historical (they're not just stories) events of the Christian Faith: The crucifixion and resurrection of Jesus. I want to focus in on the crucifixion in this article.

Now somewhere back in time the Church has labeled the remembrance of Jesus' crucifixion as "Good Friday." Good for us because of what Jesus accomplished on the Cross for the forgiveness of our sins. But I always cringe a bit when I take this label back into the events that transpired that day.

John reminds us in John 1:14, "So the Word (Jesus) became human and lived here on earth among us." Some of you may be more familiar with the KJV: "And the Word became flesh and dwelt among us." Jesus, although he is God's eternal Son became a fully human being, formed in Mary's womb through the power of the Holy Spirit. The writer of Hebrews penned: "Because God's children are human beings – made of flesh and blood – Jesus became flesh and blood by being born in human form. For only as a human being could he die, and only by dying could he break the power of the Devil, who had the power of death." (Hebrews 2:14). Jesus was "fully human". If his mother had to remove a sliver from his finger that he got from helping his father in the carpenter's shop, IT WOULD HURT!

Now I want to keep these things in mind when participating in a Good Friday service. It's easy to sit in a comfortable church, comfortably dressed, and listen to the details of his death. It's difficult to imagine, let alone identify, what he went through as a fully human being. Matthew tells us that at his trial, the governor's soldiers "...made a crown of long, sharp thorns and put it on his head". Long, sharp thorns digging into his fully human head (See Mathew 2:29). Would that hurt? Would you hurt?

At the Cross. They laid his fully human body on the thick wooden beams of the cross and pounded large nails through his fully human hands and feet. Did he cry out in pain? Would you? Then they lifted up the Cross and dropped it into the hole prepared for it. And there he hung – for 6 hours! (See Mark 15: 25 – 34). Have you ever had to endure pain that seemed like it would never quit? Did you cry out to God and nothing happened? Jesus can identify with you. It got so bad, that Jesus, in his fully human beingness cried out to God: "My God, my God, why have you forsaken me?" (Mark 15: 34). Have you ever cried out to God in the midst of severe pain?"God, where are you?" But Luke gives us Jesus final words on earth: "Father, I entrust my spirit into your hands" (Luke 23: 46).

During the last several years I've had some pain experiences either directly or indirectly related to my journey with cancer. During this time I believe that God is helping me to develop a new perspective on pain. When I'm in the midst of pain I imagine myself identifying with Jesus' earthly pain. In a sense, and I say this carefully, when I'm in pain I'm experiencing the human pain that Jesus went through; of course, not as intense, or for the same reason. In the midst of pain I am learning to identify with Jesus' pain on the Cross for my sins, and I have a growing appreciation for what he went through. I think about this whenever I'm in pain, especially severe pain!

I remember I began to form this thinking when I was going through a severe pain experience; so bad that I cried out: "O God," and began to pound my fists on one of our upstairs walls, "Oh, God, I can't stand this!" Julie came running upstairs and cried out to God in prayer for me. I'll never forget this. Pounding on the walls at least gave me some way to express my pain. But in reflection I am reminded that JESUS HAD NO WALL TO POUND HIS FISTS AGAINST. Even if he had, a wall wouldn't have helped, His hands were NAILED TO THE CROSS! That's where and how he bore our sins, and there was no relief until it was finished. "Then (and only then) he bowed his head and gave up his spirit" (John 19:30). Think about this the next time you're in pain.