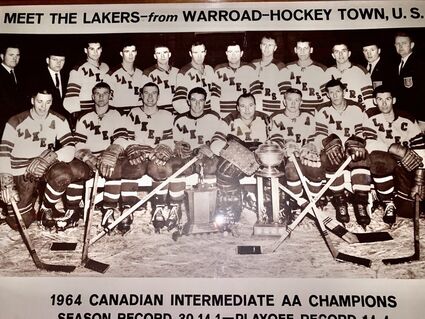 Once there were four of them - Lester, Dayton, Myron, and Sam, Depression-era kids born between 1930 and 1935 - who wanted to do two things - play hockey and serve in the U.S. Army.

Lester, the oldest, died in 2018 at age 87. While he didn't play top amateur level hockey like his younger brothers, he was good.

Recently, Sam Grafstrom, the youngest brother and a 1935 model, was equally delighted that all four brothers had served in the military.

Sam was asked about Salol's amateur hockey team, which made its mark in the 1950s.

"Rube Bjorkman played with us. We had a team and were in kind of a league here and up in Canada. I was just getting out of high school. Rube came home from one of those European trips, either the Olympics or the U.S. team," he recalled, remembering fondly back to those long ago days.

"We played up in Sprague and Vassar (Canada), he said, adding that he was a 1955 Roseau High School graduate.

"We went to State that year and got beat 1-0 by St. Paul Johnson, and they ended up winning State."

There were some laughs and he has forgotten nothing.

"We had a good team that year. Herbie Brooks was playing with the St. Paul Johnson team. In later years when I was playing overseas, we were in Geneva, Switzerland, in the world tournament and I roomed with Herbie," he said, mentioning that it was before Herbie got to be famous.

"He was just a regular guy from St. Paul, and I was a guy from Salol at that time," he said.

He has fond memories of Rube Bjorkman.

"He was really a star when hockey was just getting going."

Hockey is in their genes.

Lester, who was drafted into the Army in 1952, was sent to West Germany and got to play some hockey over there.

"He got started a little later in hockey. He had hip problems for a while," said Sam, mentioning that Myron, now 88, had been drafted in 1954 and went to Alaska.

"I volunteered for the draft in '55, so I'd go in right after I got done with high school," he said.

He planned to get his two years in, and come home and farm.

There was another motivation.

"I was not about to not go in the service being as all my brothers had been in. I'd have to live with that the rest of my life," he laughed.

"I ended up out in Camp Carson in Colorado Springs. Then, I went straight from there to Korea for 16 months."

He returned home in 1957, having missed two years of hockey.

"They probably would have been good learning years," he said but is proud to have served.

"I was in the infantry with the Eighth Army. We all served. That was pretty good. A guy learned a lot being drafted."

"When I went to Korea, they had signed the truce in '53. When I was there, we were north of Seoul right on the DMZ. It was terrible. We walked a lot of guard," he said, noting that he and Myron were PFCs and Lester and Dayton were corporals.

He recalled that Myron was sent to Alaska but couldn't play hockey the first year.

There is luck in life.

One of the guys that Myron played hockey with on the Fairbanks Army team talked him into going to the University of Minnesota.

"So, that's how he ended up at the U and played three years for the Gophers," he said, explaining that freshmen weren't eligible to compete at the varsity level back then.

"You know, we were kind of lucky. We came along when hockey was just getting going, and we got to play with some of the better players in the country."

One, for sure, was Eveleth's John Mayasich, acclaimed as Minnesota's finest high school hockey player.

"I played with John in the world tournament in Switzerland and played against him when I played in the U.S. league. He played for Green Bay."

He recalled when the U.S. National team got beat by the Russians in 1961 at the world tournament.

"We came home and a guy said, 'How could you let the Russians beat you?' And I said, 'You don't know how good those guys are! They're really good!'

"We were playing the Red Army and all they did was play hockey," he said, recalling that the Russians defeated them, 1-0.

All the memories are good.

It all began in little Salol and then at Roseau High School for legendary coach Oscar Almquist.

"Myron played for him. I don't even know if Dayton got to play. He was really small when he got out of school," he said, adding that they came from the backwoods and weren't considered top shelf.

"Dayton just barely made it in the service. He was just about five feet when he went in. So, he was just a little kid when he got out of high school. We grew slow at home."

Dayton, he said, got much taller in the Army.

Sam once told his wife, Lola, "When you think about it, we came out of this small area and got a little bit on the world scene in hockey, That's pretty good for the three of us."

Mr. Sam Grafstrom explained that Dayton spent all of his time at Fort Ord, California, but tried to get transferred.

"In a way, he was kind of lucky. He could have been sent to Korea," he said.

It's a great accomplishment that the Grafstrom brothers played for Team USA.

"Dayton played in '61 and he was coaching the Warroad Lakers in '65. So, he didn't go with that time," said Sam. "He's tough and takes good care of himself."

Myron, who lives in Wisconsin, taught in Warroad for a few years and coached the Warroad High School hockey team.

Rube Bjorkman, the 1947 RHS graduate who played on the 1948 and 1952 (Silver Medal) U.S. Olympic hockey teams, cherishes his friendship with the Grafstrom brothers.

While he isn't sure when he played for the Salol amateur team, it was a fun time.

He singled out Dayton.

"We were in basic training together at Fort Ord later in 1952," he said, acknowledging that he didn't get to play hockey in the Army.

"All the Grafstroms were good hockey players. They're good people and hardworking."

Rube knew skating was out of the question when he arrived in Korea.

"The armistice had just been signed in July 1953 when we were shipping out. You had to be careful over there."

Then he put his stamp of approval on Salol's finest.

"The Grafstrom boys are a good crew!"