The Bergstrom Benefit is This Coming Thursday 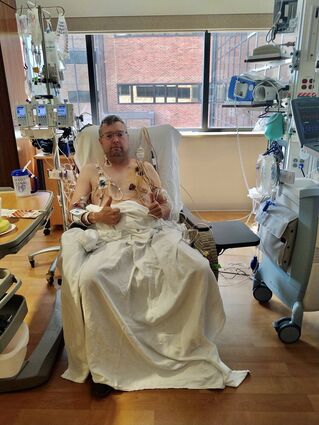 There's no holding back Danny Bergstrom, a 1997 Roseau High School graduate, who might someday run a marathon, try skydiving, or rappel down a cliff.

For many years, Danny, the son of Gary and Diane Bergstrom, didn't really understand why he would get so tuckered out, even back in grade school.

Danny is an electrician by genetics since the Bergstroms of Wannaska have been in the business for decades.

"I played football and baseball through my junior year," he said from the Mayo Clinic last Sunday evening where he recently had heart transplant surgery.

Was it heart trouble that caused you to quit?

He initially acknowledged that he didn't have any symptoms until he was 35.

"Now, looking back, I did have symptoms when I was about 10. I got played out if I ran around too hard. It was my heart acting up. I had to sit down and rest during recess once in a while and eat a Snickers bar or something like that to get my energy back up."

He will have energy to burn once he fully recovers.

Did it ever feel like your heart was pounding too hard?

"No, it was exactly the opposite. It never beat hard enough. That was the whole problem. My heart wasn't pumping enough to do its job."

It was a congenital heart defect. About seven years ago, he was diagnosed in Grand Forks with hypertrophic cardiomyopathy.

"It just means that the walls of my heart are way thicker than they should be. So, they're not very elastic," he said, noting that cardiomyopathy means his heart is just too big."

What did your doctors say?

"They figured we could treat it for 20 years probably. That's kind of what all the doctors thought. Up until a year ago, they were still planning on treating it for a long time."

He was 35, and it was to take these pills and we'll see you every six months.

"I had three catheter ablations where they basically go weld on your heart.

"The procedure involves threading a laser through your groin up to your heart and then they burn spots in your heart that are misbehaving."

He was under general anesthesia, and each time the procedure took six to eight hours.

"So, they burned off a lot of spots. When your heart goes out of rhythm, it's because the electrical signals aren't going in the right direction. So, they kind of put up roadblocks to make them go where they should go."

Before those catheter ablations, he had to lie in bed because his heart was too weak.

"It went well for a couple of years and then I had a completely different rhythm that we couldn't get rid of," he said, recalling that his kidneys and liver started to fail two years ago.

He was treated medically but kept getting sicker.

"Your kidneys don't get enough blood. Instead of the heart stopping, the kidneys were stopping. That was the first time they started thinking about a heart transplant."

Then, his doctors got it under control for a whole year until last Thanksgiving when he began having more heart problems.

"I went to Mayo in February for the pre-transplant work for a couple of weeks, but I didn't qualify because my heart was too big.

"They tried fixing it with medication and IVs."

In mid-August, he was at Mayo and doctors inserted a booster pump to help the right side of his heart pump blood to his lungs.

"My heart had gotten so weak, but the pump did the job. Doctors had figured it would take a couple of months, but it took only four hours and, after testing me, I qualified for the transplant list."

"On the 18th, I got a call from the surgeon that they had found a compatible heart."

It was the weirdest thing, he said, laughing that he and his mom only brought a couple of changes of clothes.

Danny didn't have to worry about his clothes. His mother did since she was there for the duration.

"I only planned on being there for a week and going home for a while. They did the surgery on the 19th of August and finished on the 20th."

He was one of the few people the donor heart would fit.

"It's the right size that my heart should be. My heart was big enough that it was taking up about a third of the space one of my lungs was supposed to have."

Consider Danny the bounce-back guy with his new heart. He was immobile for about five days before they had him up walking.

"The first time I stood up off the bed, three people helped me. Five days later, I was walking down the hallway a couple of hundred feet by myself."

On August 26, he first stood up and by Labor Day, he was walking unassisted up and down the hallway just to stave off boredom.

"I had the most bizarre transplant anyone had ever seen. It happened that fast," he said, adding that he relatively has had no complications because he didn't have any other organ problems.

He and Tony Hart, another one-time Wannaska boy from years ago and a recent heart transplant recipient, have stayed in contact.

"We talked a couple of times, and I called him yesterday just to check in on him," he said, adding that Tony is back home in East Grand Forks.

It was mentioned that there are the forbidden foods that heart transplant recipients have to avoid.

"Grapefruit, pomegranates, and Spanish oranges, I don't like any of them. So, I'm in lucky there."

"I like eggs, but I can't have them runny anymore. No sunny-side up, and I am going to ruin my steaks," he said, chuckling that he has to cook them to well-done.

Do you take a lot of anti-rejection medicine?

"You know, there really isn't. There's really only three of them, and I'll be done with one in a couple of weeks."

He will have to take the second medication for another year.

"If it doesn't work, there's quite a few different variants that are available."

He has medical coverage, but there are other expenses that aren't covered.

"It gets to be a lot, and I haven't worked full-time for a couple of years," he said, noting that his Mayo Clinic heart transplant surgeon was Richard Daly.

"I could still do that. Just moved a little slower through the woods, and I probably didn't make as much noise."

What do you miss the most?

"I couldn't chop wood anymore. I couldn't cut wood. I'd run out of gas way before the chainsaw."

He's looking forward to when he can see his grandparents - Charlie Bergstrom, and Adolph and Evelyn Erickson.

"I'll be home before you know it," he said on Sunday evening, full of pep.

"I should be home by the third weekend of rifle deer season."

On Thursday, October 7, his friends and family will be hosting a benefit spaghetti supper from 5 to 7 p.m. at Gene's Bar & Grill in Roseau. There will be a freewill offering. It will mean a lot to Danny, who wishes he could be present.