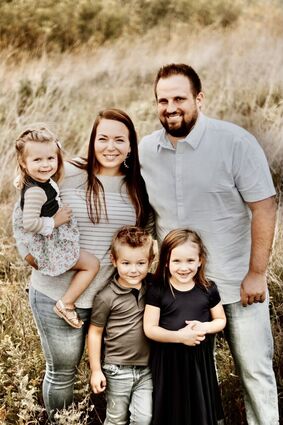 Kayla, holding Everly, and Jared with Landon and NoraLaine in front

Try throwing Jared Larson any combination of pitches and see if he can catch them.

Jared, a 2007 Roseau High School graduate who moved to Roseau for his final two years of high school, didn't allow many passed balls in his catching career.

He had good reasons for transferring from Moorhead to Roseau and living with his grandparents.

"I moved because I spent a few summers up in Roseau and loved it."

He laughed recently when asked if he weighs about 170.

"More like 270," he said, fielding questions from Fergus Falls, his place of residence these days.

Not that it is the only place he's having an impact. He's been the head baseball coach for the Ashby Arrows for a number of years.

But Roseau is still one of his favorite places.

For starters, his maternal grandmother, Gloria Lee, lives in Roseau.

"I spent some summers here staying with my grandparents, Ron and Delaine Larson," he said.

Following graduation, Jared, the son of Royce and Janice Larson who reside in Moorhead, attended Northland Technical College in Thief River Falls for a year, spent his sophomore year at Itasca Community College, and graduated from Moorhead State University in 2012.

He is one of those athletes who is born to coach.

"I was an assistant baseball coach for Todd Wensloff at BGMR from 2012 to 2014," he said, adding that he taught phy ed and health in Badger.

"I do their DAPE services, which is Developmental Adaptive Phy Ed."

He didn't have to wait long to get a coaching position.

"I was the head baseball coach as soon as I started the 2014-2015 school year," he said, adding that he's the head coach in Ashby, which is one of the schools he teaches at one day a week.

It's his eighth year as the head coach in Ashby.

"Right now, we're sitting at 10 and 0," he said on May 9, explaining that they are in the Pheasant Conference.

Asked about his overall record at Ashby, he had no idea.

"My first three or four years were not good. I had great kids, but we were young and on a learning curve."

It looks like the learning curve has turned into a solid winning curve.

Coach Larson has not had a team reach the state tournament. However, they've made impressive strides.

He tipped his cap to his assistant coach, Dwight Walvatne, a key asset with the team.

His record a year ago was 24 and 3, and he was asked if his squad has ever played the Roseau Rams.

"We played them on Friday (May 6) and we won 8-7," he said, adding that it was a really good game and they had played in Ashby.

He enjoys the friendly rivalry with the Rams' head coach, Josh Weckman.

They have three young children.

How long have you been married?

He laughed, maybe stalling for time.

And he laughed again.

"We got married in June. It's going to be eight years."

NoraLaine is six, Landon is five, and Everly will be three on May 21.

Despite his wife's busy schedule, she manages to bring the kids to many of the home games.

His catcher is Matson Hoff, and Jared had been a state tournament catcher for the Rams.

"He's good, he's a senior, and he's going to the University of Jamestown next year."

What do you remember about playing for the Rams?

"I remember Coach Tracey Wensloff, who is definitely my favorite coach out of all the years I played baseball. We had a really solid team in 2006, I think we finished 25 & 1," he said, recalling that they went into the state baseball tournament with 23 & 0 record.

He recalled that they had a great group of players with Brian McMillin, Joe Benke, Derek Biermaier, Nate Voll, and Kurt Weston.

"A lot of them were very good hockey players and won the state hockey tournament in 2007."

This year's Ashby team is similarly talented with hard workers and good players.

As the great Yogi Berra, the late Hall of Fame catcher for the New York Yankees in the 1940s and 1950s, was noted for saying:

"Love is the most important thing in the world, but baseball is pretty good, too."