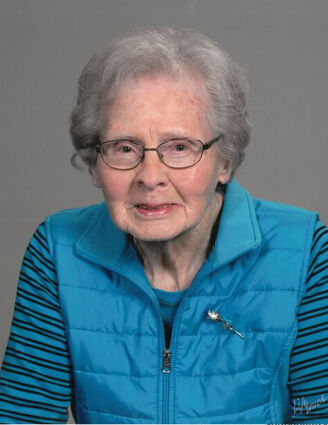 Roseau- When you live to be 100 years old, you experience a lot of things and witness a lot of change. You cross paths with a lot of people and develop countless relationships. And when you have a tender, loving heart like Roseau's Ann Baumgartner, you make the world a better place.

Three weeks after her 100th birthday, on September 16, 2022, Ann died peacefully in her sleep.

Born Annabelle Pearl Smebak on August 26, 1922 in Grenora, N.D., Ann had an adventurous and competitive spirit as her parents made a living as farmers. She rode her horse to school each day and often challenged the local boys to races after school. When she was 14, difficult farming conditions and a sagging economy drove her family to give up the farm and relocate to Roseau, where her father worked in the logging industry. Ann easily acclimated to her new community. Her family lived outside of town, so Ann lived in town with a friend during the winters to make it easier to get to school.

After graduating from Roseau High School in 1941, she met a young, handsome farmer named Ed Baumgartner. They enjoyed each other's company, but Ann and her best friend were lured to the Seattle area where The Boeing Company was hiring women as riveters to help build airplanes. While World War II raged on overseas, Ann was among the army of riveters dubbed Rosie the Riveter. Ann worked for Boeing until June 1944, when Ed traveled to Seattle to convince her that she should return to Roseau with him and start farming. She did, and they were married on November 7, 1944.

The newlyweds received 80 acres of farmland and a cow as wedding gifts, which helped them start a very successful career as farmers in Roseau County. Over the years, Ann was the quintessential farm wife. She was an excellent mother to five children and coordinated the operations of the farmstead while the men worked the fields. That meant starting the morning at the crack of dawn to bake bread, cook breakfast, run meals and coffee out to the fields, keep the house clean, and then do it all over again the next day. She kept up the yard, tended to the vegetable and flower gardens, and kept the kids on task during their school years.

But Ann also made time for herself. She loved the social and competitive part of bowling, traveling all over the state and nation to compete in tournaments. You could also find her on Lake of the Woods fishing walleye with Ed. They traveled to exotic places like Hawaii, Alaska and Martha's Vineyard, and followed the kids and grandkids in their sports and school activities. She helped found the NaChur Garden Club and was an active member of Messiah Lutheran Church, helping make quilts for underprivileged people around the world.

And that's the way that goes.

A Funeral Service for Ann P. Baumgartner of Roseau was held on Thursday, September 22, 2022 at 11:00 a.m. at Messiah Lutheran Church in Roseau. Visitation was held one hour prior to the service at the church. Interment took place at Hope Cemetery in Roseau.