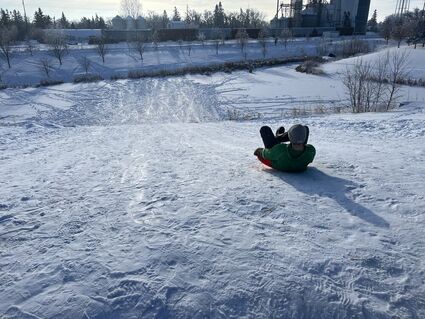 Located next to the splash pad building in Roseau, the outdoor skating rink and sledding hill are now open.

"We were hoping to open the rink and sledding hill a couple weeks earlier, but the snow just kept coming down," reports Hunter O'Leary, director of Roseau Parks and Recreation. "The city crew moved all the snow, flooded the rink and got the warming house ready. We were able to open right before Christmas. The sledding hill is just up the bike path by the river. We packed the hill down with a Ranger and groomed it with a blade. The sledding hill has since iced over and become very fast."

A 2015 graduate of Roseau High School, Hunter has worked full-time for the City of Roseau for the past three years, starting out in the streets department. In July 2022, he began working in Parks and Recreation.

"After graduation, I farmed for awhile but then decided I'd get to spend more time with my family working for the city," said Hunter.

Hunter is married to Hannah and they have two children, Harper, 3 1/2, and Knox, 2. Since Hunter played four years of Roseau Rams hockey, he knows what a smooth rink looks like.

"Harper and Knox have skates and helmets and have a great time on the rink," said Hunter. "There was quite a bit of traffic on the sledding hill and rink over school break. It's so important for the community to have more to do during winter months. Many enjoy the five miles of cross country ski trails that run through the golf course and city park as well."

In addition to working for the City of Roseau, Hunter O'Leary is a personable realtor with USA Realty. Hunter may be reached at 218-469-3096.