The Legendary Al Buffum Was a True Character 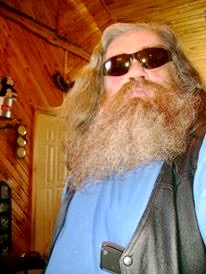 Eldridge "Al" Buffum, 68, a delightful personality who did it his way as an East Coast lawman, local columnist, colorful character, talented raconteur and burly bear of a man, died on Wednesday, June 12, while under the care of his daughter, Antoinette "Ann" Anderson, at her home in Canyon, Minnesota. He had been ill for some time.

When Al was in his prime before heart troubles and then cancer started zeroing in on his quality of life, he was a presence in the community with his loquaciousness and friendly demeanor.

Some assumed he was in the Witness Protection Program while others speculated he might have been with the CIA.

Mr. Buffum, who could never be mistaken for a dude rancher, was a sweet guy to his family, friends and everyone he ever met as long as they weren't trying to shoot him or run him over.

He was a big target, easily 250 plus pounds.

Tim Erickson, the owner of True Value in Roseau, developed a close relationship with Big Al.

"We had a lot of good conversations," he said, happy to talk about his late friend.

"We used to have breakfast about three times a week when he had the movie theater," he said before mentioning Al's kindheartedness.

One example was Al had frequently distributed movie tickets to handicapped children and their attendants from the Children's Home in Roseau.

"He'd let them into the show for free any time there was a show that they'd enjoy, and he'd spend time visiting with them," said Erickson.

Naturally, these kids were drawn to him immediately. There was only one Al Buffum in their world.

"The funniest story I have about Al was when one of the Harry Potter movies was being shown at the Roso Theater. In the movie, there is a big, humongous guy who looks a lot like Al," he said, adding that Al collected the tickets just past the candy counter.

Maybe he took piano lessons and ballet as a child, but he looked straight out of a tough neighborhood.

"He was strong Italian," said Erickson. "In his family, you were either with the mob or you were with the police. He was an undercover cop. He'd been shot, and he'd been run over by a van."

Sit a spell with Al when he was recounting his lawman days, and there was no rancor about whoever had tried to kill him.

He was like a baseball player who had been spiked by base runners and beaned by pitchers on a regular basis.

"The one thing I'll always remember is he had a big, big heart for anybody who got a poor lot in life. He was really kind to those people," said Mr. Erickson.

"I told Al he should have written a book on his life. It would have been a book I'd love to read."

They were close friends. Of course, Al had many friends.

"I'll really miss him as a character.

Whenever we talked after he sold the theater, he still missed it. He really enjoyed the interplay with people."

Just a week before his death, Al's wife, Dana, noted that he had been in law enforcement before he relocated to the Roseau area in the 1990s.

"He worked in D.C. and in Boston," she said, adding that he was born in New York City and his family had moved to Boston when he was a young child.

"He grew up there. He'd been out in D.C. where he'd been working," she said. "He was a detective for the Metropolitan Police Force for many years in Washington, D.C. He retired on a disability. He got hit by a truck."

"It was in the line of duty. So, probably to some extent. I don't really know because you know Al and his stories. He got retired on a disability about age 40."

Was Al ever shot?

"Oh, he said he was, but no. There was a bullet that went through some glass and he got some glass in his eye. I don't think he was ever shot directly, but he always told people he was."

What's the sweetest thing about Al?

"He's a big teddy bear, and he absolutely loves his kids, loves dogs, and he's a heck of a gun enthusiast," she said. "He's a sweet guy."

"He was injured working for the D.C. Police Department. That's federal," said Dana. "He was a detective. As a matter of fact, Teresa (his second wife) told me years ago, and I'm not sure if this was with Boston or D.C., that he was the youngest guy to ever make the rank of detective."

She added that he went to work for the Boston Police Department right out of high school and also went to college and got a degree.

Did he kneel down and propose?

"Well, not on his knees, specifically," she said and laughed. "He just went and bought me a ring and said, 'Here's your ring.' Honestly, I don't really remember. We'd both been married twice before."

Last weekend, Jon Johnson recalled that he had some interesting discussions with Al at Nelson's Cafe some years ago.

Maybe it was his New York or Boston accent that made Al's stories so enchanting.

"I thought his claim to be an undercover agent was kind of unusual but interesting," said Mr. Johnson smiling at the memory.

They all have their memories.

Local businessman Tanner Hovda recalled when he was in high school after Al bought the theater.

"Whenever I bought tickets, he was always the man. I can still picture Al sitting on the stool collecting tickets. He brought a lot of excitement. He was friendly and he was happy, and he was taking my money with a smile," he said.

"He had the beard and he covered up the whole stool. He was huge. He was the bouncer of the movie theater. You always bought a ticket so you didn't have to mess with the bouncer."

Who did he remind you of?

"The guy from the bar stool in Cheers," he said, adding that the actor who played Norm Peterson didn't have a beard but he looked like Al."

"Al came in the room and you always knew he was there. He was a kind-hearted guy and enjoyed talking with people. He liked to know what was going on with them."

Last Saturday, she put it all together about the man you seldom saw clean-shaven.

"He was just a big grizzly bear. He was sweet, but I'm sure he could do some damage," she said. "His last few years had to be pretty tough on him."

She prefers to remember the better days.

"He had a gruffness about him, and he wasn't scared to give his opinion in his columns. He said it like it was. He was a straight shooter."

As presently planned, there will be a memorial service for Eldridge "Al" Buffum on Saturday, July 20, 11 a.m. at Helgeson Funeral Chapel in Roseau with Pastor Joe Elick and Pastor Jared Gustafson officiating.

A special thanks to Julie "Sister Sunshine" Elick for her assistance with the photos for this article.