This Italian lass will build her first snowman 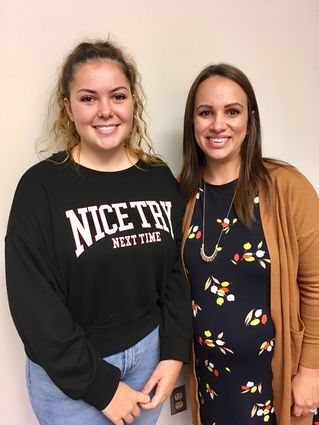 Here she came, a young lady from Latina, Italy, who is the newest foreign exchange student at Roseau High School.

Even before Elisa Valente strolled into Assistant Principal Kelsey Johnson's office last week, it's becoming known that Ms. Valente is no slouch academically.

More about that shortly.

Elisa is staying with the Neil and Angie Santl family in rural Roseau, and their daughter, Brooke, is her host sister.

When she speaks, the words flow, and thus there is no need to speak slowly to allow her to mentally translate from Italian to English.

"I'm staying with a really great family. They really welcomed me into their family, and it's nice to know somebody in school because their daughter is in my grade so she has introduced me to a lot of people."

Play any sports back in Italy?

"We don't have sports in school so I just go to the gym with my friends," she said.

How'd your English get so good?

"We study it in school, starting in elementary school, and we study it every year," she said.

"I did special courses in the afternoon, and I've been lucky to study abroad every summer on scholarships," she said, adding that she's been to the United Kingdom twice.

"And last year, I went to Exeter, New York. That has really improved my English. And now, this experience is really helping."

She has a terrific smile, is confident, and her life is an open book."My mother is German and my father is Italian. So, they'd rather live in Italy, but my mother decided to give birth to me in Germany where her parents live," said Ms. Valente, who is a junior at RHS.

"So, every year, we go to Germany a couple of times and sometimes my grandparents come to Italy."

"Yes," she said and then grinned when asked if she speaks Italian fluently.

She is fluent in Italian, German, and English.

"I studied a little bit of French in school for two years and I kind of understand Spanish because it's really similar to Italian," said Elisa.

Mrs. Johnson asked about her plans for college.

"I want to study medicine and become a pediatrician. It's always been my dream," she said, adding that her dad, Vittorio, is a police inspector in Latina and her mother, Bettina, is a sales manager.

The young lady glowed when she spoke about the hospitality of her hosts, the Santl family.

"I have my chores because I am part of the family. I do my laundry and I help with other things with the girls," she said, mentioning Brooke and her older sister, Taylor.

It has been an exciting month so far.

"I went to the homecoming dance, and that was really fun because we don't have dances in school."

If she was hoping to end up in the southern USA, Roseau will be an eye-opener.

"We don't have snow in my city. I'm already cold now. I live in the center of Italy where it's really hot," she said. "The winter we get in December and January is the weather that's now here. That's as cold as it gets."

If Elisa were back in Italy, she would be in her fourth year of high school.

"When I go back, I have to do the fifth year, and I have a big exam at the end of high school," she said. "If we don't pass the exam, we have to retake the last year."

"They're more outgoing and everybody talks to me. I think if I were an exchange student in Italy, they would be more shy and wouldn't talk to me like here," said Elisa. "That's really nice."

Ms. Elisa Valente was asked if she understood the word "crapshoot" in regards to ending up in Roseau instead of San Francisco or New Orleans.

So, what did you pick?

"I picked the United States," she said, gaily laughing about the odds of ending up in little Roseau.

What happened when you saw you were heading to Roseau?

"Well, I was surprised. I looked at where most exchange students go in the United States, and it wasn't Minnesota. So, I wasn't expecting it. When I looked it up on the Internet, I really didn't get how it was because it's so different."

"When I arrived here, I started to understand and I like it so far."

Have a boyfriend back in Italy?

Got a boyfriend in Germany?

Mrs. Johnson had the perfect explanation,

"She's a traveler and has to stay free."

"I study until I'm sure that I can get the best grade. Even in Italy, I try to get the best. Having good grades gives me the chance to travel. And if I don't have good grades, I can't go. That's my main motivator. I'm here on a scholarship that I won thanks to my grades."

She's here for the school year.

How often do you talk to your folks?

"Once a week. The first few weeks, I called them more times, but now it's once a week."

She has an older brother, Patrizio, 18.

And that includes this coming winter, which is supposed to be colder and snowier.

"I'm a little worried about her in the cold," she said laughing.

"But I think she will survive. She has a nice host family and I'm sure she's being treated amazingly. I'm glad she's here making a lot of friends and having a good experience."