CHALLENGED BY MOTHER NATURE BUT NOT BEATEN 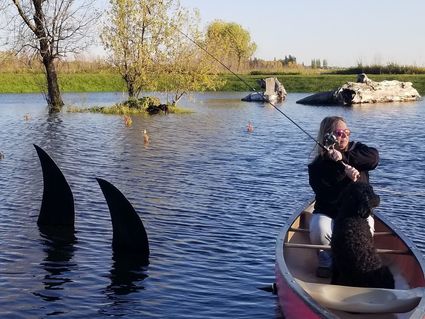 Andy Boroos and Michelle Erickson have been challenged by Mother Nature in the past few weeks, but they are up for the challenge.

Their driveway has been 100% covered with high water for the past two weeks. Michelle said, "We decided to start canoeing last Wednesday when water was starting to come over our running boards on our truck."

One of their first thoughts were how they would get to and from work. Andy had thought they could pack a large bag and stay at a motel. Michelle answered, " that is out of the question because of our animals."

The outside portion of their dog kennel was under water and she would have taken a leave from work before leaving their dogs and cat unattended with the water rising.

Andy had to come up with plan B. He found a trolling motor in their storage shed, bought a new battery to operate it and canoeing to and from their vehicle would be how they would get in and out of their yard. Michelle stated, " we loaded up the canoe last Wednesday morning and tied it to our mailbox for our return trip into our yard."

Andy and Michelle both work at Polaris which calls for early morning canoeing. "It took us about roughly 20 minutes from start to finish," said Michelle.

Their driveway is 1/2 mile long. They would leave the house about half hour earlier than normal to get to work on time.

The canoeing had been going well until the high winds this past Friday morning. Normally Andy had been able to get them back and forth with ease, but the winds created a bit of a challenge. Michelle had to help row and steer from the front end which she said, "made for a good workout."

She had her suitcase and other bags in the canoe because she left town Friday with a friend. Otherwise, when the water was calm, they actually thought the canoeing had been kind of fun.

Couples go through a lot of challenges, but these two are definitely being tested and passing with flying colors. They have even added a bit of humor to their situation by adding some shark fins in the water for some photo ops. You can't control Mother Nature, but you can have fun with what she dishes out. Andy and Michelle are using their humor to make it through a tough situation with a few laughs along the way.

Their house which was built above the flood zone last year, is surrounded by a dike. Without the dike, they would not be able to be home. Their yard was filling up with all the water so they purchased a 2nd transfer pump. They have pumped 1,090,000 gallons of water and counting. They are gauging the time they pump the water and the amount of water pumped per hour to come up with an amount pumped. They are finally starting to see some grass again!

Their biggest challenge is not being able to run to town if they need to. They get what they need after work and get home. There isn't any going back, so they need to plan ahead.

Even though they are making the best of a bad situation with some humor, they have had to miss out on some life events. "We did miss our grandson's birthday, so that was mentally challenging. It has been stressful and I did shed some tears," said Michelle.

They did drive into their yard this week after work because the wind was way too strong. Michelle said, "We would have ended up in our neighbors backyard via the farm field south of our driveway." It was a big challenge not being able to see where he was driving, but Andy pulled off yet another challenge.

If it continues to rain and water levels rise, it will be back to the canoe again for the couple. They are hoping the water drops before winter. Michelle mentioned, "if it freezes this way, that will create more challenges, which we will face if it gets to that point. "

There are others that are facing similar situations. "We have a neighbor north of us that has sandbagged his house, but I don't know how that is going," Michelle said.

It's been an adjustment for the couple and they are doing a great job holding their own. "We did have an offer from a friend from work to bring us a boat but our canoe does work well," they said.

It's quite amazing how well they are surviving this situation and still smiling and having a little fun. "We do what we have to do. We can't control mother nature," stated Michelle.